For someone best known as Film & TV writer, I’m doing a lot of writing about non-film, non-TV things on this website, arent I?  Have no fear — I do plan to resolve that shortly with more industry related stuff, but first, do me a quick favor and look at this photo. 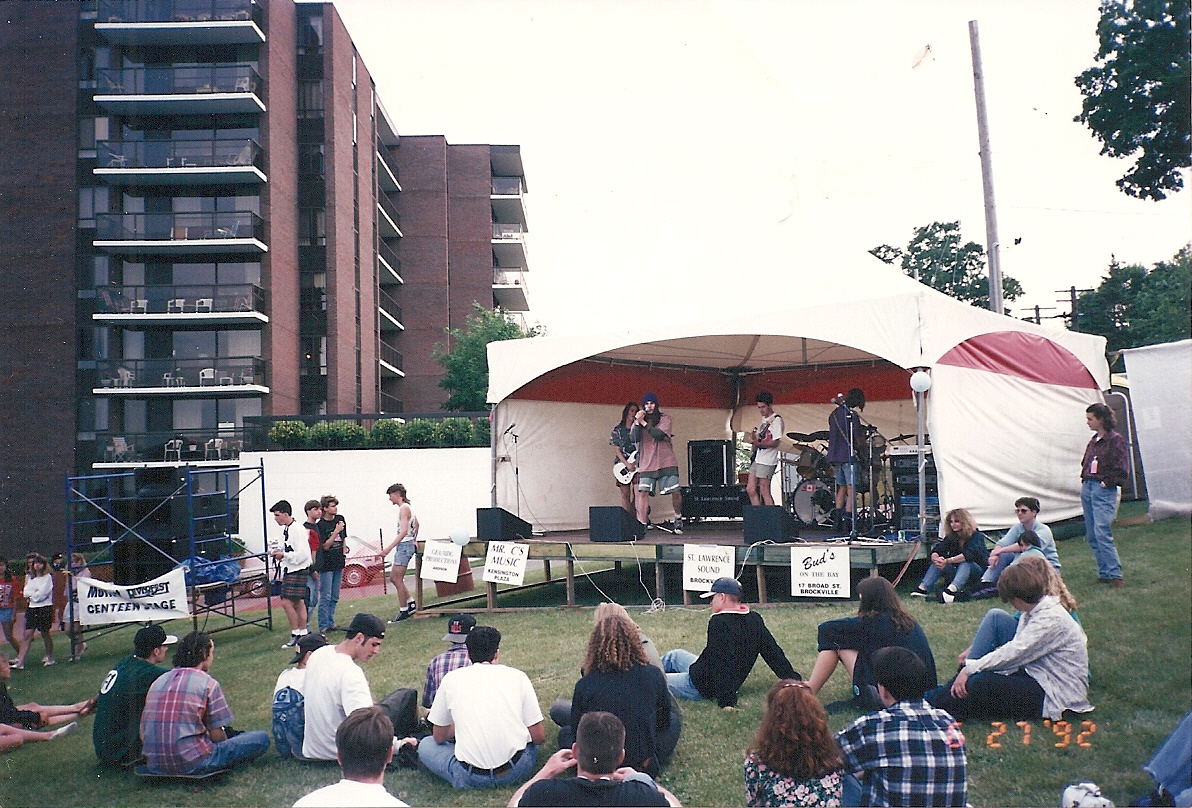 Examine it closely.  What do you notice about it?  What do you see?  What don’t you?  What, aside from the watermarked date on the bottom right corner, tells you it was taken 18 years ago?

The first would have to be clothing.  Look at the band on stage, look at the people watching, and check out the people walking by in the background.  You see flannel and combat boots and ripped shorts.    Also, note the hair – not since the late 60s did you see such long hair on guys, and in the early 90s that was complicated by the fact so many girls wore their hair short.  You see ball caps and sideburns and high-top sneakers, and there’s grain and grit to the photo, captured on actual film too, and you didn’t know if the photo turned out at all until you got it back from the lab days or weeks later.  Yes, friends, 1992 is as alien to 2010 is, as 1974 was to 1992.  1992 belongs to the ages now; kids born in 1992 started College this month – the average age of the kids in this photo was – yep, 18 years old also.  They’re all largely married with kids now, and in one tragic case, a member of that band passed away last week at only 35.  Old photographs like this fascinate me – especially ones of people going about their day. In the case of photos from the late 80s to mid 90s, I really wonder.  Those kids with the Doc Martens and cut-off cargo pants, the nose rings and Day Glo hair and dreads – where are they now?  A lot of them now are Soccer Moms and their banker husbands with the paunch and pattern baldness, the strollers and 2.5 kids, the nice suburban home.  But they had to come from somewhere, and that somewhere was probably a mosh pit.  They’ve become what they vowed they never would; they became adults

You know what else tells me it’s an old photo?  Do you see any cell-phones clutched in hand?  Do you see people texting?  Of course you don’t.  If this show happened in June of 2010 there’d be hundreds of photos posted on Flickr, videos uploaded to Youtube and the band’s official website, where you could also watch music videos they put together themselves, along with a stream of their album and free downloads.  All of this could be accomplished without a record label’s involvement.  It’s a different world, and a new generation taking its reigns.  And that’s the big problem.

I think I noticed how much things have changed at a Metric show in NYC last year.  I was up on the balcony above the crowd and the band, and all I could not help but notice the sea of LED screens blinking on like stars in the night sky.  People were listening to the band, I guess, but they were also texting and messaging, Tweeting (I guess) – and I realized that was the big difference; that “furnishing proof I was at the Metric show” was more important than “watching the band I paid 30 bucks to see perform.”  It was less about “the band” and more about “me watching the band.”  Whatever happened to simply enjoying a show?  Does the art of performance somehow lose its legitimacy if you, the audience, can’t stake your little claim to having been there, to making it about you?

I know, I know, I sound like one of those “get off my lawn” types, but whatever happened to just “watching the band” and appreciating the music?  Perhaps one of the rudest displays I’ve ever witnessed was at a record release party for a performer managed by a friend of mine, where she was performing a short acoustic set and people were too busy texting and talking LOUDLY to the point where you could barely hear her.  At least the majority of the crowd was as annoyed as the performer was, but it made me have to ask what the fuck these idiots were doing here if not to see and hear the performance?

Maybe it’s because music is occupying less of a special place for people, particularly teens and twenty-something’s than it used to.  We can blame them obviously for their narcissism, but the fact is we created this monster.  Music driven culture has been dying a slow death for the last decade, as the main lifelines – Much Music, MTV, VH1, commercial radio, have moved away from music programming and into “reality programming.” Generation X – my generation, would be (and were aghast) at the mainstream’s attempt to co-opt them through Grunge Fashion on the runways at Milan, and pre-fab TV like The Heights.  Generation Y seems to demand it, and is insulted when it’s not pitched and promoted and sold to.  Sure we had The Real World, but look at the series’ early run and compare it to the here and now; now you have a generation raised on reality, or what is dubbed reality by marketing.  A generation who takes Andy Warhol’s “15 minutes of fame” (a statement that dripped bitter irony I might add) to heard and not only expects it but demands it of them.  Generation Y are the polar opposite of the preceding one; they constantly live in public.  Never out of touch for more than five minutes, because “not being in the network” is akin to death.  But what happens when nobody is watching you anymore?

The movie business – my business – is just as culpable in this.  They’re peddling the fantasy of life, not the reality (and by “reality” I don’t mean grim Hubert Selby reality anymore than I mean the plastic artifice of reality TV featuring vapid celebrity wannabes); the reality of just trying to get through your day, through school, and through life, with your head down and your sanity and dignity intact.  Both my wife and a good friend separately asked me a few weeks back why Hollywood doesn’t make movies about “average” and real people – it’s all million dollar McMansions and swimming pools and kids who stepped off a fashion magazine – it’s the life so many in this age group want and never get.  I never would have imagined that John Hughes movies would look like gritty documentaries compared to the teen oriented product squeezed out today (and that includes Weird Science), but it does.

What are the great stories of the now generation?  The Jazz Age had The Great Gatsby.  The 50s had On The Road and Rebel Without a Cause.  The 60s?  Too many to mention.  The 70s, and the 80s recognized teens and embraced them in the films of John Hughes, in movies like River’s Edge and Heathers, and gave them their own network with MTV.  The 90s had Douglas Coupland, Slacker and Lollapalooza … but The 2000’s?  We’re still waiting, unless you think Jersey Shore and The Hills are the apex of creativity.  It burns me, because I know there are great stories out there trying to be told.  I do think that music is as strong now as it has been since the early 90s – Arcade Fire, MGMT, The Dead Weather, Metric – but it’s as if the young and bold voices have either been locked out of the store, or aren’t interested in getting inside.

In his review of the Daria TV series (you know; when MTV was good) at Chud.com, Troy Anderson asked a question that articulates the point quite well;

Does individuality still matter in such a conformist age? Will we always be locked in this Us vs. Them attitude or can we ever escape it?  As an adolescent, adversity helps to define who we are as people. Hopefully, we’ve grown up since then. It’s time for a new generation to endure the struggle.

I still have hope though that things will change as they inevitably do.  That pendulum always swings back and as much as Generation X was a response to the shallow vapidity of the generation that preceded it, the generation that follows the Milennials could very well be our salvation.  Just as long as they keep their eye on the ball, and their eyes AND ears on the band on stage before them

ADDENDUM: Not two weeks after penning this, the Wall Street Journal printed a story about the “cell phone cameras at concerts phenomenon” and the growing backlash against it.  Sorry, WSJ, I said it first.