Wow, I should write more pieces about U2, given how popular it was.  Anyway, here’s the rest of it. To my friends in New Zealand seeing U2 this week, drop me a line, let me know how it was. 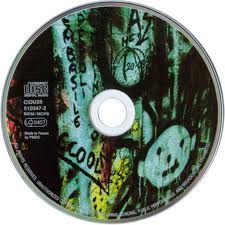 When I walked into the record store, the owner was playing what I would later learn was “Who’s Gonna Ride Your Wild Horses” but I was all eyes at that point, and not ears.  I looked for the new release rack and finally found what I was looking for.  It took me a minute, because the first thing you notice about Achtung Baby is its cover. 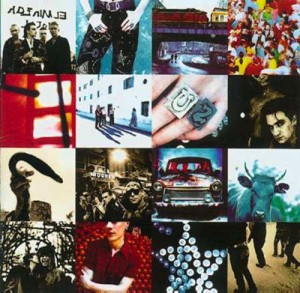 It was off-putting, coming from a band who had up to that point selected a single image for their cover art: 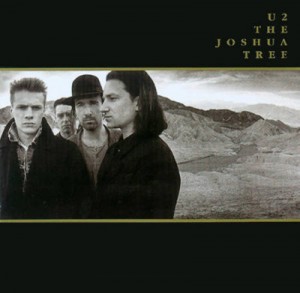 So right away it didn’t look like U2, but that didn’t discourage me, obviously, because I threw down for the cassette copy, as I didn’t own a CD player at this point, yet had a Walkman, a boom box and a car stereo with tape deck.  I paid for it, declined the bag, and ripped the cellophane off the case on the way back to my car.  I slid behind the wheel, fired it up and popped in Achtung Baby.  The test signal rolled first and I set levels, and then, music …

When it started, it sounded like my stereo speakers were broken, and it wasn’t until Bono started singing that I realized that was the entire point.  Given the last U2 song released was the melodic All I Want Is You (well, technically a cover of Cole Porter’s Night and Day” from the Red Hot + Blue compilation followed that), it was music from a different planet, but still very much U2.  I really wasn’t crazy about it to be honest, but now I can’t imagine the album without it.

EVEN BETTER THAN THE REAL THING 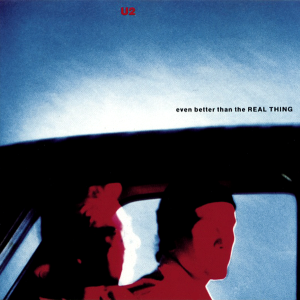 Now this was more like the U2 I knew – a sweeping rock anthem, blending the old and the new.  The “rhythm and blues” influence of The Joshua Tree and Rattle and Hum was gone, and it harkened back to The Unforgettable Fire in its “European feel” but by this point it was clear that AB was a totally different beast. 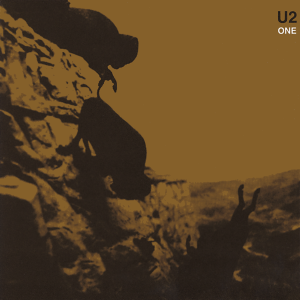 Some songs take several listens to “get” but “One” was one I got the moment I heard it, and is probably their best known, best loved song.  It’s apparently a popular song at weddings too, which blows my mind because if you listen to the lyrics, you realize pretty damn quickly it’s not a love song.  With lyrics like “You ask me to enter/ but then you make me crawl/ and I can’t keep holding on / when all you got is hurt,” it is ironic their most popular song is also their most misunderstood.  It’s hard to think of this era in music and with U2 to be “Classic Rock” but One is a classic.

UNTIL THE END OF THE WORLD

It’s about Judas, and his betrayal of Jesus, told from Iscariot’s perspective, but for me, it seemed to speak to what I was going through at that time in my life; an on-again-off-again relationship with a girl who was much more into me than I was into her, being stupidly into someone else who I had no chance with.  And by the time I realized I had made a big mistake it was too late.  She’d moved on, and told me it would be the end of the world before she reconsidered. 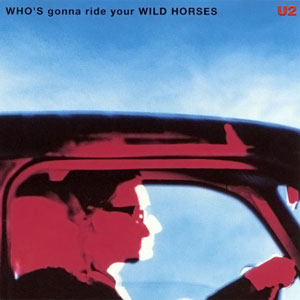 A nice salve after the bitterness of the previous tunes, it’s one of the lesser tunes on the album, at least for me.  I think it is for U2 also, given how the fact it was a single, it really isn’t remembered.  It’s the closest to a Joshua Tree-era tune on the album and stands out for it.

For some strange reason, the song that becomes before the side break on pretty much every U2 album becomes my favorite on that album, and So Cruel fits that bill.  It’s simple and melodic, and sets up the two songs that follow.  One of the things we lost with the rise of the CD is that “act break,” the song that holds its spell on you as you flip the cassette or album over; something to linger while you wait for the next track.  So Cruel still does that.

I already went in-depth on The Fly and its video last installment, but I didn’t realize at the time how this song and that video would be the blueprint for what was to follow shortly.  U2 had long wanted to “redefine” the concert experience and what the subsequently pulled off did just that – and that influence can be seen and felt to this very day. 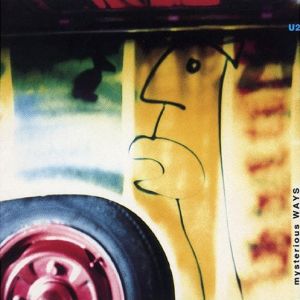 The first time I listened to Mysterious Ways, I didn’t like it.  It was too “dance” too “House”, and as a self-import and, self-involved 18 year old, those things were just wrong.  Now, it’s my favorite song on the album after So Cruel, and best played loud.  Go figure.

TRYING TO THROW YOUR ARMS AROUND THE WORLD

To this day, every time I hear it, I think of a very particular scene; me, driving the streets of my town after dark.  It’s winter, the ground is covered with snow and every street feels abandoned.  There are no people out and fewer cars, but the music coming from the stereo is warm and soothing.

There’s a scene in The Diving Bell and the Butterfly where Jean-Dominique Bauby, paralyzed by a stroke, is remembering a trip he took with a mistress, and as we segue into the flashback, the first strings of Ultraviolet can be heard, before BLASTING into the big intro.  The image, of the mistress from behind as she sits in the passenger seat of a convertible, her hair whipping in the wind, is now forever associated with this song, but it remains one of my favorite tracks on the album.  U2 resurrected it from limbo for their current U2 360 tour as an encore, as a throw to their fans, who by all accounts are thriled to see lss known songs make the playlist.

Its refrain of “don’t let the bastards grind you down” has become my personal mantra.  They try their best, and sometimes it looks like they’ll win, but I always bounce back and am still here when so many of them have gone.

The somber closing to a joyous and yet bitter collection of songs.  A downbeat song they closed shows on their tour with and didn’t diminish the high everyone felt coming out of it.

So yeah, despite Nirvana and Pearl Jam, RHCP, Ministry, Soundgarden and countless others occupying the sonic landscape, AB remained lodged in my tape deck for months, it seems, and remains my favorite “winter album” — yes Achtung Baby makes me think of snow and chilly air.  A lot of stuff happened in those remaining weeks of 1991 and AB was the soundtrack to it.  Hell, when I started college the following fall it was still out there, still playing in record stores, still blasting from dorm rooms – albums had a longevity then that they don’t have now.  In fact, in the 19 years since then I don’t think I ever stopped listening to it.

In March 1992 I got to realize a dream of the previous 5 years and saw them on their Zoo TV tour.  I cut afternoon classes and drove the three hours with three friends, spent a good part of the day wandering the city near the venue, and got to see The Pixies open for U2.  It was, of course, an amazing show and an amazing experience – hell, The Pixies actually opened for them on that leg of the tour – but I realized much later that seeing U2 live represented the climactic moment of my love for that band.  I’m still a fan, and will be until I die, even though they’re not the pinnacle of my musical taste like they were.  Seeing Zoo TV was the conclusion of that period of my life, which was changing quickly.  I graduated High School three months later, I moved away to College five months after that (and ended up living down the street from where I saw U2 barely half a year before).  I saw them again in August of that year, and then thirteen years passed before I saw them once more, on their Vertigo Tour, general admission, right up front.  That’s probably the last time I’ll see them perform, live, because nothing could top that experience outside of being their personal guest or something.

People change and music changes, and 19 years can seem like 19 years, and can also seem like just last week or last year.  The agonizing wait for an album is gone – music gets leaked, officially or unofficially – in the case of their No Line on the Horizon album they streamed it on their MySpace site for a week prior to the album’s release.

I’m a U2 fan, but will probably never be as into U2 as I was in 1988-1992 and probably will never be into any band that much again.  Music obsession is a young man’s game and it has to be, because that music will be with you for the rest of your  life.  When Generation X hits retirement age, rest homes across the world will have Grunge nights, and arguments will break out in the lunch room over the merits of Nirvana over Pearl Jam, just like High School with more wrinkles, more grey hair and less of it.  The rec room will be filled with the music of Ministry and Nine Inch nails, and especially U2.  II still listen to Achtung Baby regularly, like Doolittle, like Nevermind, like so many other albums that stood the test of time.  And, like every memory I have of that year and time of my life, I’ll never stop listening to it. 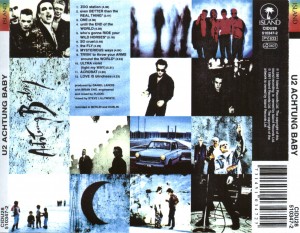