It was a couple weeks ago that my wife and I decided to check out “Da Vinci’s Last Supper” at the Park Avenue Armory; a light and sound art installation created by Peter Greenaway (The Cook, The Thief, His Wife, Her Lover).  This was really for my benefit, as it pertains to the novel I’m currently in the second draft of.  But what happened just prior to that made me realize that I’ll never leave New York.

We took the Subway to 79th and Broadway to catch the cross-town bus and, as we had a bit of time, ducked into the famous H&H Bagels to grab a quick nosh, as they say here.  She went for the Pumpernickel; I went for the “Everything,” both still warm, no crème cheese, no butter, nothing but bagel.  And on the way out she remarked that “the ‘Everything’ from H&H is kind of your thing isn’t it?” And I realized, yeah, it’s my thing; I finally have a “New York thing.”

New York remains one of those mythical cities and every once in a while I have to stop and give my head a shake and realize it’s become home, to the degree previous homes never really did.

I was a late arrival to New York – I only set foot here in February 2003, on a visit – prior to that there’d only been layovers (LGA in 1985, EWR in 1997).  And even on my first weekend trip it felt right; like I had spent an entire life there.  Like I belonged.  And when my now wife entered my life, I felt the pull of the Big Apple; five years after that first visit I settled here, and really can’t see ever leaving it.

It’s a tough town.  It’s destroyed many, and sent many more the survivors scurrying back to where they came from.  It doesn’t give you anything easy.  Combined that with the fact I’m in a difficult business that also doesn’t give you anything you don’t fight for, sometimes living here can feel like a form of self flagellation.  We could live in a nice spacious house in the suburbs or in the Midwest for what we pay for our one-bedroom place here, but we remain, because there is not here.  So with that in mind, the following are a few of the reasons why I will remain here until they call me a New Yorker or I die first: 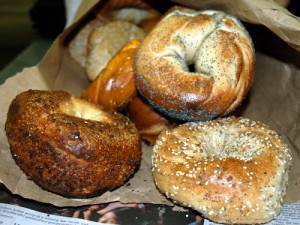 Already mentioned, H&H being one, Murray’s being another.  But after years of store-bought bagels, it’s a gift to be able to buy them fresh.  And, apologies to Montreal; there is nothing like a New York Bagel.  The theory is it’s the water they use – a hard water drawn from the Aquifers of the upper Hudson that give them a unique flavor, same as the pizza.  And speaking of which … 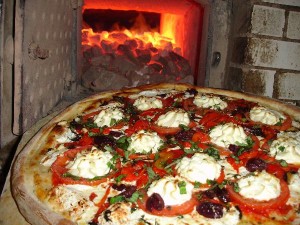 New York Pizza stands above all others.  It’s the water, again, the dough, the crust, the whole package.  Forget deep dish (come on, you don’t eat pizza with a knife and fork) – I have yet to have a “bad” pizza here My current favorite pizza can be found at Waldy’s on 6th Ave.  My wife famously returned home one night to say she’d considered picking up a pie from Waldy’s but knew I was cooking dinner.  I explained to her that anytime she thinks about picking one up, she should do so, and I’ll stow whatever I was cooking in the fridge. 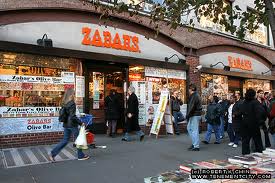 Zabar’s is an institution; groceries, bakery, and deli counter where you can get a damn fine pastrami sandwich without having to brave the hordes of tourists clustering Katz, like cholesterol encrusting around your heart.  We routinely stop by just to pick up a loaf of their famous Rye Bread — and once ran into actor Eli (The Good, The Bad and the Ugly) Wallach while buying a container of half sour pickels.  You can’t beat that for a New York Experience. 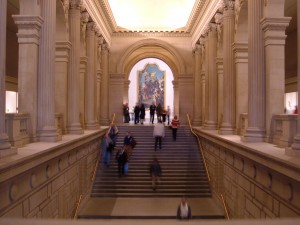 Of course, it can’t be all about food, can it?  No, there’s a reason New York is a cultural hot-spot, and its many museums are the reason for that.  There are plenty of them, too – ones dedicated to the Police, the FDNY, the Barrio, the City of New York – and the Museum of the Moving Image in Astoria is for film fans everywhere.  There is anything for anyone, no matter what your interest is.  But for my money (and I can say this as a member) the Metropolitan Museum of Art is the best in the city.  You can’t come to New York and not visit The Met – lord knows I’ve taken much advantage of my membership enough times, often trekking over there just to wander the galleries, or check out a new exhibit.  That’s the great thing about it – they change the exhibits regularly enough that every six to eight weeks there’s something new.  It’s also a classic New York spot – where else can you take in an exhibit on the history of the House of Dior, and see Woody Allen and Soon-Yi Previn have a tiff? 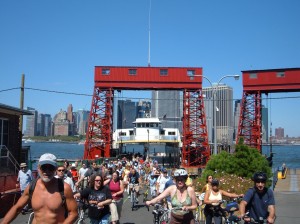 Situated off the lower end of Manhattan, Governors Island was recently turned over to the city and has been opened to the public as an urban oasis surrounded by water.  A free ferry ride takes ten minutes, and from there you pretty much have the run of the place.  It’s dog-free, which is a big bonus, but one of those places increasing in popularity.  It’s likely that at some point commercialism will invade this spot, but in the meantime I’ll enjoy as much of it as possible. 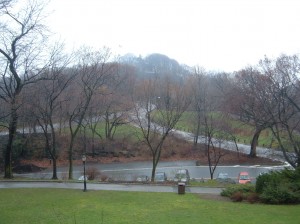 I’ve avoided revealing too many details of where specifically I live, but I will say that I’m within walking distance of Fort Tryon Park, at the upper end of Manhattan and leave it at that.  Fort Tryon is Manhattan’s little secret – a park designed by Frederick Law Olmstead (the same who designed the much more popular Central Park) – best known as home of The Cloisters (the Met’s Medieval Art Collection).  But, it also holds my favorite spot in the city, what my wife calls “Brad’s Thoughtful Place” atop the Linden Terrace, overlooking the Hudson, the George Washington Bridge, and the Palisades.  It’s where I go to brainstorm – often bringing script or manuscript pages with me to take the red pen to.  On a related trivia note, if you happen to have seen the Don Siegel-Clint Eastwood flick Coogan’s Bluff, the climactic motorbike chase was filmed entirely in Fort Tryon Park.

Boston in five hours, Philly in two, the Hudson and Catskills an hour north, the beaches of Long Island and Connecticut, and Washington DC are all within a short car, train, bus or plane ride.  One thing about NYC is it tends to grind on you after while – semi frequent tips outside the city are good for the soul, though it usually only takes a few days to be ready to come back again. 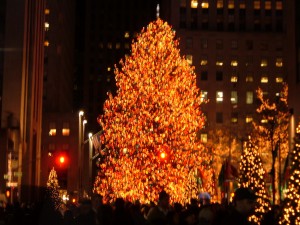 Everything they say is true – Christmas in New York is one of those things you just have to experience, whether it’s the Radio City Christmas Show in all its cheesy touristy glory, or the tree at Rockefeller Center. My personal favorite Christmas spot is Bryant Park.  I was never the biggest Christmas person before I moved here and married, but I can count this to be one of my favorite times of year.   And on that note ….

And on that note …

I’m closing up shop for the holidays (and trying to muscle through more of my novel in the process).  See you all in 2011.