Social media is one of those many facets of modern life that would have been alien to us only five years ago.  Now words like “unfriend” and “like” and “Facebook” and “Tweet” have become part of the lexicon, when only a few years back, they would have sounded like a foreign language.

Immersed as I have been in the world of the early 1990s, I realize that if you were to transplant someone from, say, 1991, to 2011, to them it would be like setting foot on an alien shore.  Just walking down a busy street, this stranger in a very strange land would see people staring at little palm-sized gadgets, listening to smaller devices that carried a thousand songs, and wonder where all the record and book stores disappeared to.

I got a reminder of how swiftly things can change the other day.  I had created a fan page for MIXTAPE (my comic series, coming from Ardden in early 2012), but was holding off on making it public until next weekend, with the kickoff of the New York Comic Con.  I had uploaded the logo, and some art, and posted some pertinent links to articles on the resurgence of 90s culture.  But that was it … I and a co-administrator were the only ones aware of its existence.

Then, my wife found the page.  She clicked “like” on it.  This action showed up in the main page newsfeed, where, witnessed by a mutual friend, they in turn clicked on the page, saw what it was and “liked” it as well.  Their action caught the eye of another mutual friend, who repeated the process and, well, you can probably guess the rest.  Like a pebble knocked loose, it rolled and struck a smaller rock, which in turn struck a larger, and a larger after that (I think I saw this in an old Wile E. Coyote/Roadrunner cartoon).  By that point, with ten people (some of them complete strangers) having liked the page, I realized it was best to just step out of the way and let the dam thing go.

So if you haven’t yet, please surf yourself on over to Mixtape’s official Facebook page and “Like” what you see to stay updated on the latest news or share with anyone who may be interested.  We will be officially launching it next week at NY Comicon, and will have some cool promo items to give away at the Ardden Booth (659).

And with that in mind, enjoy your first (non-FB) look at the logo for MIXTAPE: 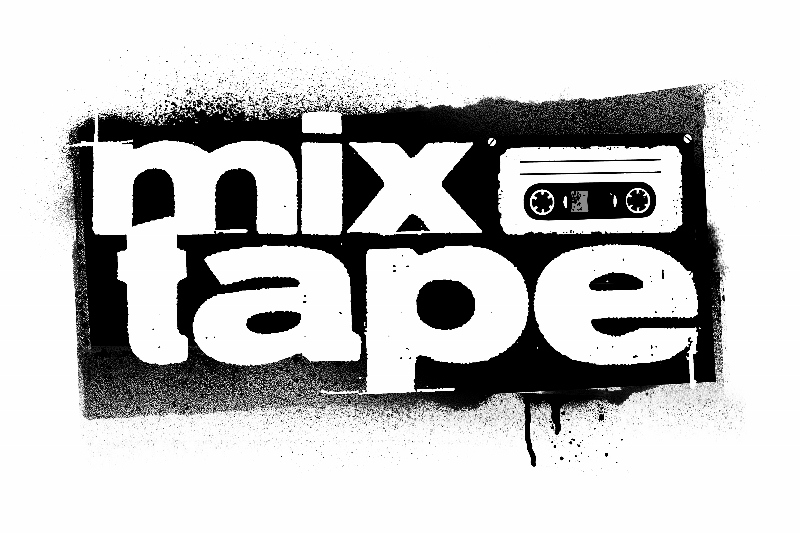 A comic book gets its logo