February 2012 set a record for numbers of visitors to this website.  I trust it’s because I’ve been updating it with greater frequency than previously, all detailed in my “screw this internet garbage” post.  I know it’s also because of MIXTAPE, which was unfortunately delayed.  On that front I should have details on the new publication dates for stores and iTunes in the next week.  Or not.  Bear with me.

But amidst all the MIXTAPE happenings and goings on, it’s easy to forget that I have a day job, which happens to be writing movies and TV. 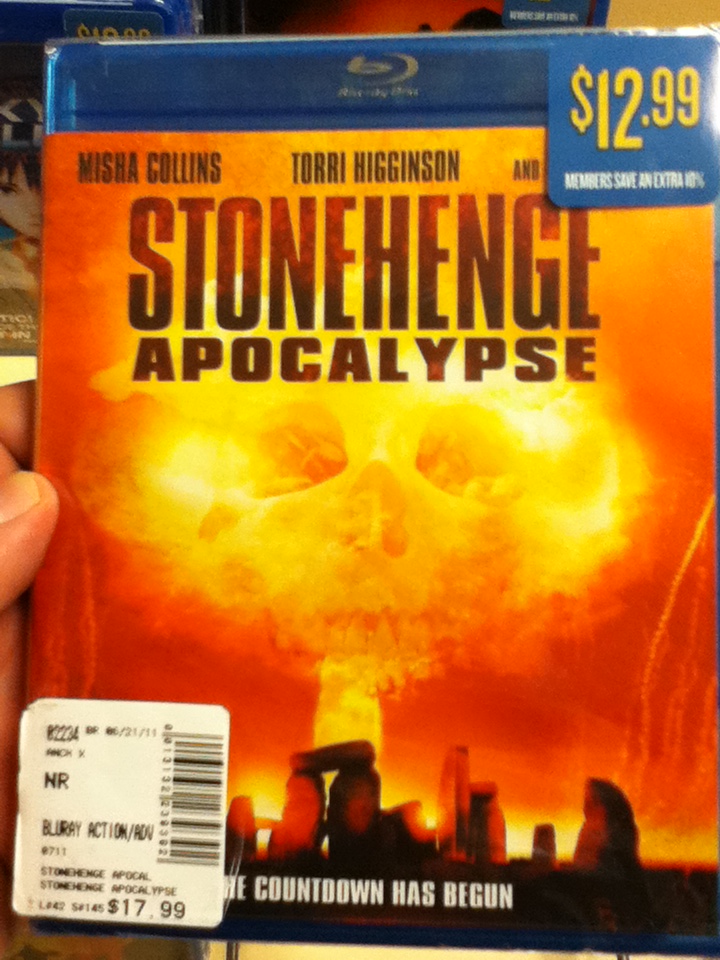 I co-wrote it, it aired on SyFy, and scored huge ratings.  Like, 2.14 million viewers huge.  It got big ratings around the world in face.  Reviews were … well, not that bad, overall.  Hint: If you’re expecting hard science fact from a movie called STONEHENGE APOCALYPSE, I don’t know what else to say than “it must be wonderful there on your world.”

So yeah, I’m a writer, and currently what I’m writing as my day job is movies.  Two of ’em as a matter of fact; one sci-fi, one fantasy (with a third on the boards, depending on which way the wind blows).  That’s my bread and butter, really.  There’s also the matter of the third (a horror) due in theaters sometime this year.

Well, in New Zealand at least.

I am ridiculously fortunate to be able to do what I love to do, and actually make a living off it.  People would chew off their own arms to have the life I have, even the ones who gave negative reviews to Stonehenge Apocalypse and RoboCop: Prime Directives.  I realize this, and accept it with a great deal of humility.

Writers are notorious for their ability to bitch about how their work is received and reviewed.  Sometimes we’re justified, sometimes we’re not, and we’re not always right.

But ovies are a collaborative process.  There’s no way around it. Movies take a lot of time and a lot of money, and involve the efforts of hundreds of people, from the cast and crew down the line to the distributors and marketing people.  One of the things about doing MIXTAPE as a comic series was its streamlined nature.  I write the scripts, the editor gives notes and suggestions, the artist draws them, I approve everything, and that’s it.

It’s been said that nobody ever sets out to make a bad movie.  That bears repeating:

Nobody sets out to make a bad movie.

True story.  Years back I was watching some TV talk show about movies, and it was one of the worst circle jerks I’d ever witnessed.  The general gist of it was “it’s better to be critically acclaimed than financially successful”.  One filmmaker who’d had some degree of both said he’d rather have the critics on hsi side than the audience.  I wish I could tell you what he’d done recently but (big surprise) he’s fallen off the map.

Because how does one define “bad”?  If taste is subjective, why does one person’s voice take precedent over another’s?

Another true story.  Years ago I was listening to some radio call-in show right around Oscar time (you know, the months-long industry circle-jerk that culminates in the awarding of a bronze statue of a naked dude).  People were calling in and naming their favorite films, and among the usual suspects – Star Wars, Gone With The Wind – some dude, without a hint of irony or dishonesty, chose Bloodsport as his all-time favorite movie.

If you’re unfamiliar with Bloodsport, this’ll jog ya:

Thing is, this guy was completely sincere — this was his favourite movie.  And know what?  I make movies for that guy.  I respect that guy more than someone who picks Dr. Strangelove or The 400 Blows as their favorite, regardless of whether it is their favorite film, or just the film they know is the “correct” answer. I don’t know who this dude was.  I don’t know where he lived, or what he did for a living, but I can see him on some rainy weekend cracking open a beer and saying “fuck it, I’m watching Bloodsport”.

Guys like him are in the majority too.  They’re what keeps the movie biz going.  Not the critically acclaimed art-films, but the meat and potatoes that keep the engine running.  I’ll take one of those guys over a hundred self-proclaimed intelligensia any day of the week.

So, for filmmakers aspiring or otherwise, take heart when you consider the odds.  Of the estimated 6,840,507,003 people on this earth (and given that we know at least one of them thinks Bloodsport is the greatest movie ever), then it’s a certainty at least one who thinks Stonehenge Apocalypse is the greatest thing ever committed to celluloid.

And yes, that makes me damn proud.

7 thoughts on “The Good, the Bad, and the Apocalypse”