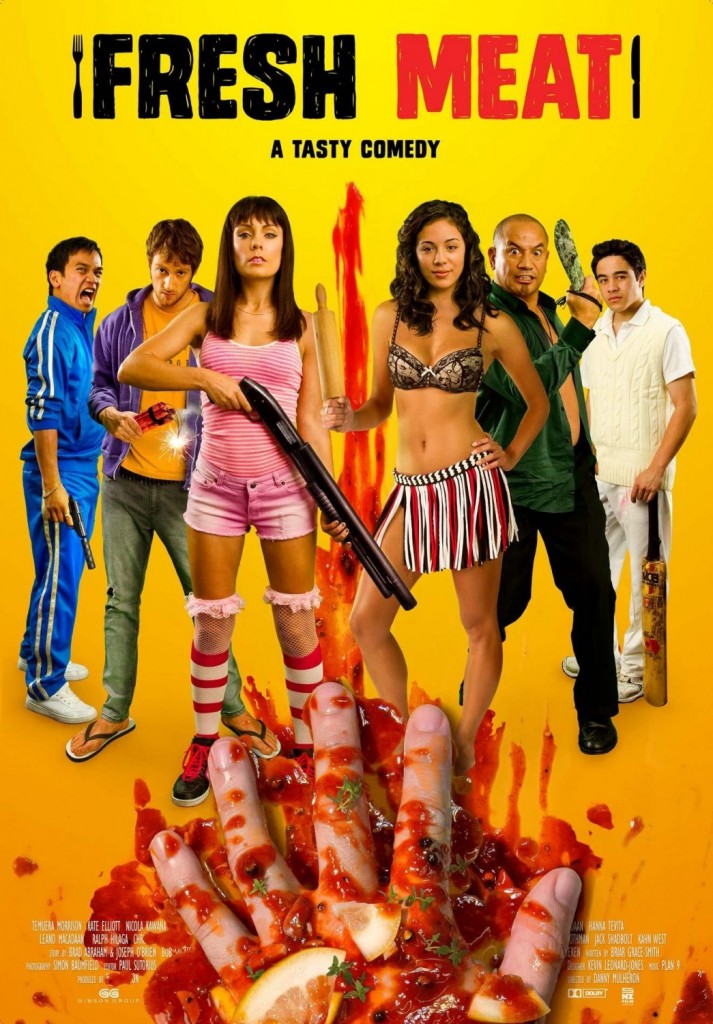 If you look closely at the bottom left of this poster (third line of credits from the bottom) for the upcoming NZ horror comedy FRESH MEAT, you should just be able to make out the name of yours truly under “Story by”. That’s because I wrote this movie.  Sort of.

Story was mine, along with Joseph O’Brien. Sixteen years ago we wrote a screenplay called “Hell For Breakfast” that we intended to film by ourselves in the house I was renting. We were going to shoot it in gritty black and white, cast a bunch of actor friends in it, and basically have an ultra low-budget horror film to shop around and show as an example of what we could do if people gave us actual money.

[Remember this was back in a period when it wasn’t unheard of for someone with some 16mm film stock and an idea could make a name for themselves — see Robert Rodriguez with EL MARIACHI, and THE BLAIR WITCH PROJECT as the most obvious examples.]

HELL FOR BREAKFAST (or “H4B” as we came to call it) was a gritty crime thriller mashed together with a splatter film. The logline: a band of ruthless criminals on the run take a seemingly normal suburban family hostage, only to learn that it’s the family they need to worry about.  It was THE DESPERATE HOURS meets TEXAS CHAINSAW MASSACRE.  It was the second feature length screenplay I wrote, and the first written with a collaborator.

Anyway we wrote HELL FOR BREAKFAST, completing the first draft over Labor Day Weekend 1996. While everyone else was enjoying BBQ’s and fireworks, we were holed up at Joe’s office, compiling our longhand rough work into a master document, and rewriting, polishing, cutting and splicing, until we finally typed The End.

H4B was done.  We were proud of it, and began showing it to people, to get their feedback but also to hopefully raise some money and interest to get a film rolling.

And then a funny thing happened.

No, they loved it, and all of a sudden there was what we in the biz call “heat”, on it and on us. It turned out our no-budget DIY screenplay was actually really good. Soon enough people were calling us up and asking if it was “available”, meaning were we interested in optioning it to them under the guise of producing it as an actual movie, not a movie made by a bunch of idiot 20-somethings. And we were seduced by the idea of having actual professionals make our movie.

We were young. Young and stupid. But you can forgive the young for being stupid. When you’re a struggling filmmaker, you want someone to tap you on the shoulder, tell you you’re a great writer and say “we want to make this movie.”  You don’t want to struggle forever, or even another week, month or year.  Add the fact you’re working a shit day job. An opportunity comes along to leave that day job for your dream job, the temptation multiplies.

So we optioned it out. This seemed like a good idea at the time, because it was a good idea. Post-college we didn’t have any money to make a movie, so when people came around with the money and interest, we looked at our minimum wage jobs and minimum wage paychecks and saw an opportunity to leave both behind. Having a movie in development meant people would start taking us seriously, we thought. If someone somewhere put money on the table because of us and our work, it tells everyone else that we were good enough to be paid to do what we do.  It would make everything easier, at least we thought it would..

HELL FOR BREAKFAST, or “H4B” as we came to call it, almost went to production in 1997, with a cast that at one point included Judge Reinhold, Sheila McCarthy, Chris Penn, Michael Madsen, William Forsythe, Balthazar Getty and the late Corey Haim.  We were doing table reads with actors – including a very strange weekend with Judge and Corey — rewriting like crazy and waiting for the moment the movie went into production and we could quit our day jobs.

Of course that never happened, because in the film business what goes up inevitably crashes down.  Financing got delayed, people got tired of waiting and dropped out, and as quick as things looked to be finally coming together they fell apart.  The project died on the table and when the option rights lapsed a year or so they released the body bacj to us for burial.

There was still a happy ending to this part of the story – we were hired on the strength of H4B to write ROBOCOP: PRIME DIRECTIVES in ’99 and neither of us has had to work a day job ever since.  H4B had served its purpose with that hire, and we figured after our duties on Robo were completed, we’d return to the world of H4B to remove the “changes” thrust upon us by the previous rights holders, and use our new found RoboCred to get it off the ground again with us calling the shots.

And then someone else read it …

THAT story in Part 2