I like music. A lot. I listen to music. A lot. I listen to it mostly when I’m writing, or when I’m taking a walk (as a break from writing), and I listen when I return from that break for more writing.  I generally write from 9 am to 5 pm, and allowing for breaks, for walks, for errands, will probably cram a good 6 hours of music into a day.  Multiply that by five days a week, you’re looking at 30 hours of music.  I’ll leave weekends out of the equation, though if I were to include them, you’re probably looking at 40 hours.

This music isn’t white noise either. It’s all based on whatever project I’m working on.  I recently returned to work on the novel I had to pause working on in June, because other work with the requisite deadlines needed attention.  But slipping back into that literary world was eased by the fact I knew what music to listen to while writing it (hint; lots of BritPop).  Every project I write has a playlist of songs or albums that get me “in the zone”.  One SciFi project I’m developing with a director buddy of mine has been plotted out to David Bowie’s classic glam trifecta of Hunky Dory, The Man Who Sold The World, and The Rise and Fall of Ziggy Stardust and the Spiders From Mars.

Anyway, this next part will take some audience participation so I hope you’re all up for that.  If you have iTunes on your computer, open it up, and go to the Top 25 Most Played option.  What are your most played?  What do they say about you?  More than  you think.  To start, here’s mine:

And as proof I’m not lying, here’s the screenshot: 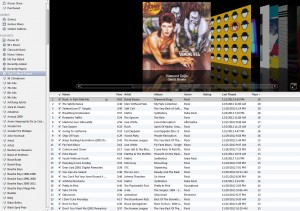 I really like Synthetica, the latest Metric album, and the gorgeous ‘Breathing Underwater’ is my favorite track.  It’s also one of the only two 2012 albums represented.

The other 2012 album represented is technically Jack White’s Blunderbuss, though ‘Fly Farm Blues’ is a single from a few years back, and ‘Machine Gun Silhouette’ is a B-side from Blunderbuss.

I’m really listening to a lot of 80s music these days. Who knew I was such a big fan of The Human League?  They’re the most represented band in the list after Metric, and tied with Jack White

The only 90s tune is by Morrisey. For any of you who knew me in High School this is a big deal because in High School I HATED Morrisey, but nostalgia means you now like stuff you would have hated 20 years ago.

And there’s only one Bowie track, but it’s probably my favorite Bowie tune.

If you’re interested and brave enough to share, please do so in the comments field below. You can forget the screen-shot as proof; I’ll just have to take you at your word.