It was supposed to be just a weekend away from the grind of NYC.  We (my wife and I) had been meaning to get away for a few months now – our last substantial trip “off the island” was in January, to Atlantic City of all places, just to experience something new.  And experience it we did.

But in the months since, really from April on, we’d been meaning to get away for a weekend; nowhere spectacular, just someplace not New York.   So, April, we were going to get away.  Then I attended MoCCA Fest, so that weekend was a no-go.  Then Fresh Meat landed at the TriBeCa Film Festival, which ate up 2 weekends, then my wife had work-related things come up.  Then I was invited to participate in some Free Comic Book Day events.   April became May, which became June, and we still hadn’t gotten away.

So a couple of weekends ago, we decided. The Poconos, over the NJ state line in Pennsylvania.  We hadn’t been that way in six or so years, it was close, and the tourist season hadn’t started in force so we were able to do it cheap.  We booked the car, booked a hotel, and the plan was set. We were going to hike some mountain trails, eat in diners, and hit up a DQ, because we only do that when we’re out in vacation land.

Her work, not mine.

You see, my wife is a book publicist.  And part of being a publicist means being available for your client’s needs.  So when such client was having a book signing in suburban NJ, and it was strongly advisable that she make an appearance, show her support, and basically do her job.

So on the Saturday we went, to Mendham Books in picturesque Mendham, NJ to support this author and their book. And as my wife did her job for the three hours that followed, I found myself wandering the bookstore.  For three hours. 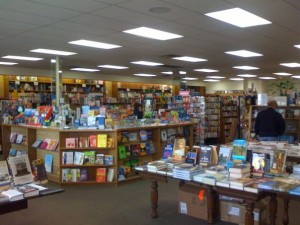 Now I love bookstores. Every town I’ve visited, on holidays or whatever, wandering the main drag if I saw a bookshop you know I’d be going in.  And I’d spend twenty, thirty minutes just browsing the shelves, or if there was a specific purchase I wanted to make, I’d make it, and be on my way.  It bemoans to see so many going the way of record stores, as people rush to embrace tablets and e-readers, and give print a pass. Yeah, places like Amazon.com are great, and convenient, especially if you’re looking for a specific item. But what about those undiscovered things; the ones you walk past, glance at on the shelf, look through it, and decide it looks interesting?  When I first moved to New York I’d have this ritual where I’d walk down Broadway every Friday, from 66th to 26th streets, and in that span visit three bookstores, a record store, and a comic book store. By the end of that weekly walk I rarely went home empty handed.  There was something exciting about anticipating I’d becoming home with something I hadn’t planned on buying, but did.

That was 2008; now five years later only the comic book store remains, the rest having gone the way of polite political discourse.

So yeah, I’m familiar with bookstores.  But I’d never spent three hours hanging around in one. And what I experienced is something I think all writers, aspiring, established, or otherwise, need to do.

I started in one corner of the store and moved my way down the row, reading spines, glancing at covers, pulling some more interesting looking ones out and reading the jacket copy.  So many titles, names, authors, genres – something for everybody.  Browsing through kid-lit, I rediscovered books I’d forgotten about totally; Dear Mr Henshaw, Upchuck Summer, and The Best Christmas Pageant Ever.  I discovered that Gordon Korman – my favorite author in Grade 4 and Grade 5 was still going strong decades later, and like me now made his home in New York.

I discovered just how many young adult books are parts in a series (a lot) and wondered if it was still possible to tell a story that began and ended in the same book.  Has the market changed so much that every book needs to be part of a trilogy or seven book series, like movies and TV are expected to?

Moving into the general fiction section, I saw how many books shared ideas that various un-produced and un-published works of mine did (also a lot).  I re-discovered authors I’d read books from in the past (Philip Kerr and the late Michael Crichton) but never fell in love with were still going and going strong (because others did fall in love and stayed in love).

I wandered the non-fiction section, and saw books on every possible subject, in many cases multiple volumes on the same event.  I browsed the travel section and planned vacations I may never have the time or money to take.

I also saw how vital bookstores remain. They anchor entire blocks, shopping centers, and main streets.  They’re a place where people can congregate, talk, and read. I think of the ones that have disappeared in New York, and how their departure effectively ended my visits to that particular place or street. How I no longer buy a book there, repair to the nearby café, grab a coffee and start reading.

It made me think about the trickle-down effect a bookstore closing has on its immediate environs.  Notwithstanding the closure of a store means people out of jobs, stock sold off at a discount, and an empty storefront filled by a check cashing place or a T-Mobile store.  Some would say there’s little difference between the two.

But what I really discovered was how quickly time can pass when you’re in a bookstore.  I also realized that there were so many books, on so many subjects, in so many genres that if I were to spend the rest of my life in that store, there was no way I’d ever have the time to read every one of them. And so those three hours went by like they were nothing, and shortly thereafter we were on our way to Pennsylvania.   But we didn’t resume the journey alone, because I made sure to buy this before I left.

Especially not bookstores. We need them as much as they need us.