I’m a notoriously shy person. You won’t find too many photos of me online (and the ones that are = unflattering). I probably became a writer partially so I could be creative without having to actually appear in front of people. I was once asked by a producer to send them a headshot for a sales package they were putting together and I sent them one of actor Oliver Reed because technically they didn’t say they wanted *my* headshot.

I do like talking though (when I have something to talk about), as my hoarse, gravelly rasp earned at NYCC this year will no doubt strike you as you listen to this podcast I recorded with the lovely and talented Amber Love of Vodka O’clock. In it we talk mixtape, mixtapes, comic books, road trips, cooking (yes, cooking), and why so many great women are treated so horribly by the “geek” community (hint: because guys are dicks). Check out the podcast, and Amber’s website here.

Also, Crave Online has reviewed mixtape 1-4, and posted that review here. They said nice things about it and me, saying “Abraham concocts the perfect elixir of nostalgia, teen angst and great jams. While Mixtape does have the trappings of a period piece, [his]writing is strong enough to allow it to appeal to anyone who loves music with their whole heart.”

Thanks, guys. You might actually help me get over my near crippling shyness. 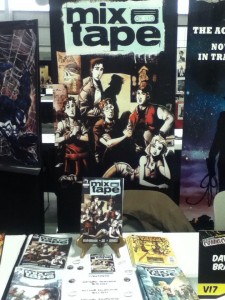 I lived here for 4 days

We sold out of issue #1 and all but 1 copy of issue #2.  Copies of 3 and 4 moved fast, with the remaining books already sold off to local and not-so-local stores. A lot of familiar faces stopped by – people I’d met at last year’s NYCC when I didn’t even have a table, people from MoCCA Fest, people from Twitter (justifying the ridiculous amount of time I spend on it). 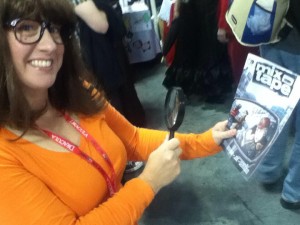 But most of the business was from new fans. A few instances were people who bought issue #1 on Thurs-Fri, then returned Saturday for 2,3, and 4.  One guy did all of that, then came back Sunday to say how much he liked the book, and asked if I wanted to be on his podcast (details to follow on that). A couple other journalists stopped buy to buy the book (they said they prefer to support indie creators with their money, and if they like the book, review it), and likewise popped back to ask about reviewing it etc.  One girl even came back to ask when she could get #5.
A good number of new fans were guys and girls in their early-mid 20s. People born too late to remember the Mixtape era firsthand, but who grew up listening to 80s/90s alternative rock because their parents were into it and played it on a lot of long car trips.  One guy in his 40s, there with his kids, was checking out the books, and when I told him what it was all about, he fished his money out and said “finally, something here that’s aimed at guys my age”.  Same as one who was there with a couple of friends. He looked bored, but when he asked about Mixtape and realized what it was, he bought a set because his friends had an extra ticket and dragged him to the con even though he’s not interested in “comic book superhero stuff”.
Overall a lot of the new readers just saw the banner with the name Mixtape on it, and came running over to ask what it was about. The fact a cassette tape features in the design told them music was involved, and when they learned there was no “twist” of superheroes or whatever, that it was just a slice of life book about the alt rock era, they were sold.
But the best thing about the whole NYCC experience wasn’t the books sold, or the numbers; it was the people. I had so many conversations with people just about music – older music, newer music (a lot of people are looking forward to the new Arcade Fire album, myself included), but also about the diversity of the comic book business. NYCC literally had something for everyone, and as it happens a lot of people were looking for a black and white book about a fabled, almost mythic time called “the 90s”, when MTV played music videos, when you had to go to a record store to buy music, and when if you wanted a mix of songs you had to record it to cassette.
Now to catch up on sleep.

And to prepare for next year. That’s right, Mixtape will be back.

BONUS ANNOUNCEMENT:
Mixtape has arrived on iTunes!  issue number 1 is available right now, with #2 and #3 arriving shortly (and #4 due next month). You can buy issue #1 here (and if you like what you see, please let me and everyone else know).

It’s that time of year again …

That’s right, it’s New York Comic Con, aka Nerd Christmas, running at the Jacob Javits Center, October 10-13th. And this year, I have a table. 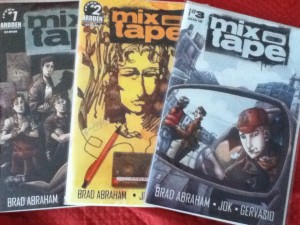 Mixtape will be holding court in Artists Alley, table V17, along with table-mates from The Devil is Due in Dreary. There you will be able to purchase copies of Mixtape 1, 2, and 3 … and a chance to snap up a limited number of … (drumroll please …) 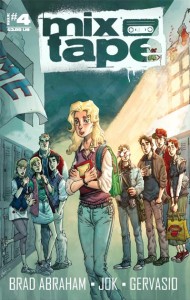 Mixtape #4 won’t be available until November, so if you’re at NYCC you will have a chance to get it early. Mixtape #4 puts us in the shoes of the enigmatic Siobhan King, freshly returned from a year studying in Europe to find her hometown has changed — or maybe it’s her that’s changed the most.  It was the most difficult of the Mixtape stories to get my head around (there’s an alternate version of the story that will probably crop up in the future), but the one that I’m most proud of. It’s also a great jumping off point to the series, as it covers ground we’ve already witnessed, albeit from a different perspective.

Now, I’m aware not all of you will be at NYCC, but that’s no reason you have to miss out on all the fun. That is why we’re launching our first ever Mixtape contest, with your chance to win signed copies of the first four issues! This contest is open to fans/readers/interested parties worldwide too.

Now, the challenge; to enter the contest you have to do a little bit of legwork. What we want are your story about the greatest mix tape (or mix CD, if you will) you ever; a) made, or b) received. Was it one you made for someone else? Was it one someone made for you? Or was it one made for your own personal/private use? Tell us about it and why it means so much to you, include your playlist, and post it on the Mixtape Facebook page.

Furthermore, the community gets to decide!  That’s right; the winner will be chosen by the number of likes and comments each entry receives. So tell your friends, invite them to play or to support you. The winner will be announced at 5PM EST October 21st.

[For those of you not on FB who still want to enter, you can email your story / playlist to mixtapecomic-at-gmail-dot-com, and we’ll post your entry on the page]

Good luck!  And I hope to see you at NYCC!

UPDATE: Some have asked if it’s okay if they just send in a playlist. The answer to that is “yes” provided you limit yourself to 60 minutes of music (no 30-40 track listings). Something that would fit on a cassette tape. A story accompanying it would give context but that story addition is totally up to you. 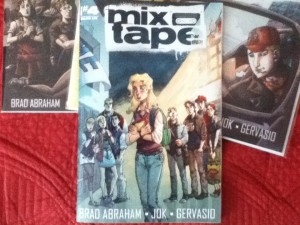