So I mentioned a little while back that I’d started work on Vol. 2 in the Mixtape saga,. That’s the good news. The not-so-good news is that it will be a while before you see it. Scripts need to be written, obviously, but I also need to figure out a way to pay for the art/printing etc. given that each issue runs north of a couple grand. Plus each issue takes 2-3 months to produce (penciling, inking, lettering, assembly), which is a factor as well. In addition I’m debating whether to stick with single issues like I did with Vol. 1 or do a straight up graphic novel telling one larger story. And I’m trying to do all this without crowdfunding it through Kickstarter or IndieGoGo if possible. Chalk that up to crowdfunding fatigue; if everybody and their cat is trying to raise $ what chance do I have? Also that potato salad guy. Fuck that guy.

Plus there’s Real Life Stuff. I’ve been occupied on three different film and TV projects which have ben eating up a lot of time, though if any one of them pops the whole “how do I fund Vol 2” problem gets solved so fingers crossed.

Which is my way of saying Mixtape Vol. 2 is on the radar but still a ways away.

But if you’re still hungering for your Mixtape fix, you’re in luck, because this is the part of the job I love. It’s where I tell you all about the comics that influenced Mixtape. All are readily available, and all come highly recommended by yours truly. Every creative endeavor is built on the foundations of the work that inspired it, and these books more than any convinced me that Mixtape could indeed be a thing. 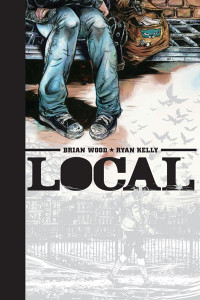 The genesis of Mixtape came when I was packing my things to move to NYC.  This involved sorting through boxes that hadn’t been opened in a good number of years – since High School in some cases. Among the many things I uncovered were many comic books, and many mixtapes. And so, rather than packing things, I spent my time listening to these tapes, and reading comic books, and saying to myself “self, there’s a story in this somewhere”. By the time I moved to New York, the idea was already simmering – I knew I wanted to write something about music, and how important it is to a teenager.  I also wanted it set in the 90s. I didn’t have a format – a movie like Dazed and Confused?  A TV series like The Wonder Years? I hadn’t really considered a comic book until I was browsing the racks at Midtown Comics and saw a hardcover collected edition of a series called Local by Brian Wood and Ryan Kelly.  Local follows Megan McKeenan, a young adult, over the span of a dozen years, as she moves from city to city.  I’m a fan of Brian’s from his amazing DMZ and Northlanders series, and as someone with a wanderlust similar to Megan’s I scooped up Local, and by the time I finished reading it, I knew what that “90s era rock and roll story” was going to be. The stories in Local are self-contained, each separated by a year and by the geography of North America as Megan drifts from one city to the next, changing before our eyes from a wayward teen to a young woman looking for a home. It spans 12 years and by the end of Local you really feel you’ve been on a journey. It’s like a comic book version of Richard Linklater’s Boyhood, and like Boyhood should not be missed. 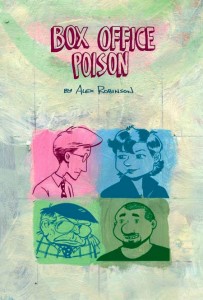 So when I moved to NY and started thinking more about Mixtape, I knew I needed to do more research. One book I had heard good things about was Alex Robinson’s Box Office Poison. Largely because the project that became Mixtape was originally a novella called “Daydream Nation” about a 40-something who travels back in time to inhabit his younger self in the early 1990s. Then I read about Robinson’s Too Cool To Be Forgotten and realized that story had already been done, and done well. I picked up TC2BF because to know your enemy is to defeat him, but realized Alex wasn’t an enemy and I wanted to read more of his work.

So there I was in Midtown perusing the shelves, and saw Box Office Poison. I pulled it out and flipped through it, and a customer passing by saaid “that’s a great book”. Then a staffer said the same thing. Convinced, I went to pay and the cashier said “that’s a great book.” And you know what? It is a great book – all 600 pages of it, all deftly charting post college life with an array of colorful characters, a love letter to that difficult time in life when you’re clutching your college degree and going “now what”? I just reread it again too and love it even more.

Oh, there’s an “epilogue” of sorts. At MoCCA a couple years later I was wandering the aisles and found myself at Top Shelf’s booth where Alex Robinson was helping out. A woman was glancing thru Box Office Poison and I said “that’s a GREAT book”. And she bought it. Alex was happy that day. 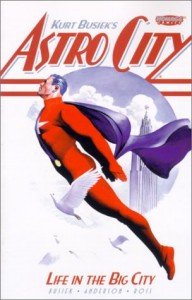 Hold on, your’re saying. A superhero book influenced Mixtape? Are you hiding something from us, Abraham? Do the teens in Mixtape suddenly manifest super powers? How can a superhero book be an influence on Mixtape?

Well, probably because Kurt Busiek’s Astro City isn’t really a superhero book; at least not the way I read it. Sure it’s about superheroes and the world they inhabit, but it’s much more than that. It’s about the people of the titular city and how their lives intersect with the superpowered beings who stand watch over it. It’s about a family moving to this city and wondering if they have a place among the heroes and villains who they share space with. It’s about young woman deciding whether to stay in the cloistered and protected neighborhood she’s grown up in to get an apartment in a different part of town. It’s about a man haunted by visions of a woman he’s never met, only to learn she was part of a life wiped out by a battle between good and evil.

But also because in its earliest issues, each Astro City story had a beginning and an ending; what you call “one shot” stories. And Mixtape’s structure has been the same; single stories spotlighting a single character, with the others running support. There is an overall theme and story that these individual ones comprise, more like a mosaic than an ongoing storyline. It’s the snapshots of life in a city and world where superheroes are real that linger the most when I read Astro City. 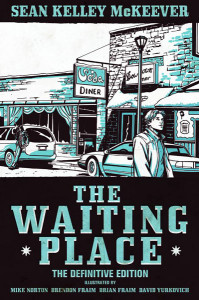 As I’ve probably mentioned too many times to count, I spent my teenage years in a small town, and that was at the tail end of a life spent in numerous cities. To say I felt rootless is an understatement; in fact to a degree I still do feel that way. And The Waiting Place captured that feeling of house parties, aimless driving, dead-end jobs, and deciding what you want to do with your life. Focusing on small-town teens as they navigate the world unfolding in front of them I fell in love with the characters and their stories from the get-go. Also writer Sean McKeever was gracious enough to answer some questions and offer advice when I was in the planning stages of Mixtape. He’s good people. Check his work out. 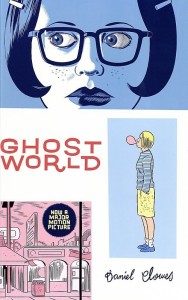 Everybody knows Ghost World, right? Dan Clowes’ immortal saga is a definite influence on Mixtape, but when I say influence I refer to the movie more than the book (which I read some years after seeing it). Chronicling the adventures of Enid and Rebecca, recently graduated from high school and realizing they need to get their shit together and soon, Ghost World is one of those stories that somehow manages to be both eccentric and real at the same time.  It’s also a funny, sad, touching look at that monent in life when you’ve drifted away from your closest friends without realizing it until it’s too late. The arc of Mixtape Vol 2 is very much Ghost World’s, as the five mains face not so much the end of their friendship but the moment where that friendship changes, like it does for Rebecca and Enid. 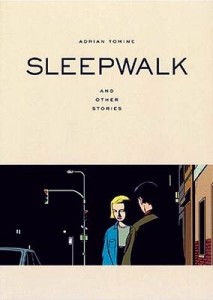 Any Adrian Tomine will do, really but Sleepwalk along with Tomine’s Summer Blonde were and are my favorites of his, and probably Mixtape’s true genesis. It was reading Sleepwalk – a gift from one of my wife’s publishing pals – that really crystallized Mixtape’s potential. Because I saw Tomine was telling the type of story I wanted to tell. Stories about the little moments where those moments become, for a moment, important. I knew with Mixtape I didn’t want it to be an After School Special about Big Issues. I wanted it to be about the cleanup after the big party, and about the little moments in everybody’s life where important things happen and you’re too self-absorbed at the time to realize it. Stuff like that last time you were hanging out with a group of friends at someone’s house, and it was the last time you were in a room together.

So there you have it; the foundations on which Mixtape is built. And while I could only hope Mixtape achieves a smidge of the acclaim as these other books have received, it wouldn’t exist without these books. I strongly encourage* you check them out, both to support these creators and their work, but also because these books have meant a great deal to me and my work.

* I also VERY STRONGLY encourage you to buy these books from your friendly local comic book shop. Pretty much every town has one and they’ll be more than happy to order it if they don’t have it.

** And ICYMI Mixtape 1-5  are available for purchase right now with both print and digital options.