I probably sound like a broken record at this point, but I have finally, FINALLY finished Magicians Impossible.

Yesterday, after two and a half weeks of review, I finished my pass on the copy proof – that’s where the publisher sends you your book as it will look on the printed page. 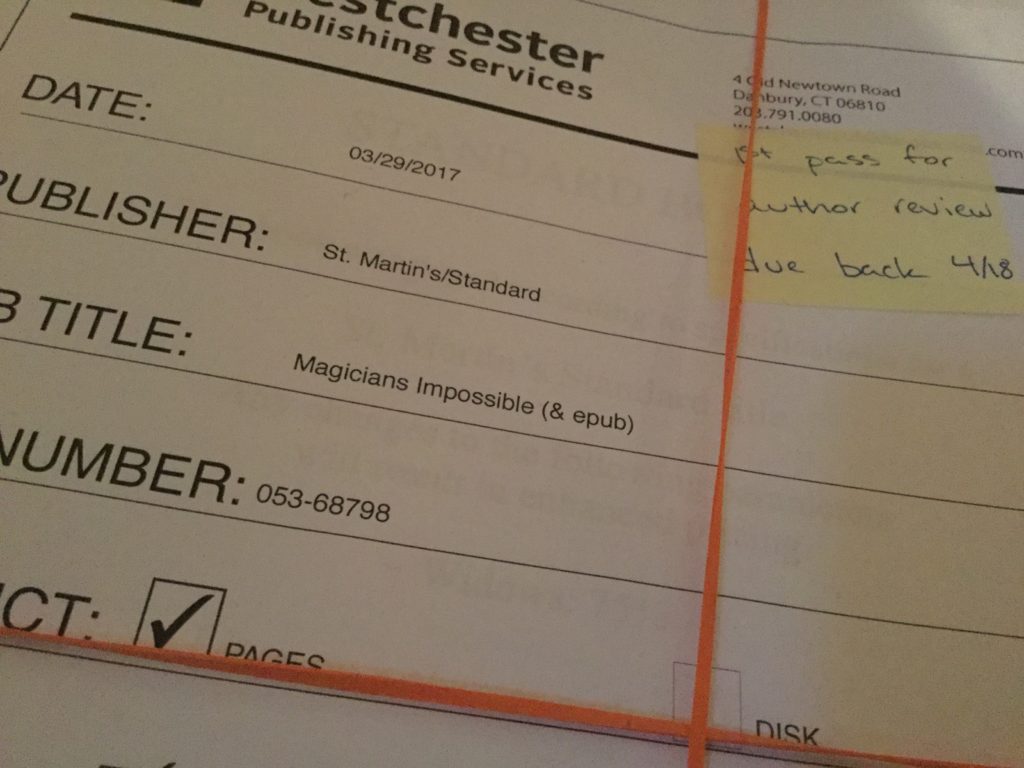 What, you thought I was going to show you an actual page from the book? Sorry, you want to read it, you have to buy it first.

I am pleased to report that the copy proof edit wasn’t too severe. Mostly it was correcting punctuation, flagging some miss-spelled words, flagging some missing ones, correcting a couple minor story errors (necessitating the removal of a single paragraph that was a little redundant to only the slowest of readers by that point) and catching some word and phrase repetition – stuff that the writer and probably no-one else will notice. Each chapter ran two to three fixes. I went whole stretches of five to seven pages without error. The ones that required a little more work were the ones that had undergone some heavy revision during the copy-edit phase.

According to the publisher’s documents this was  the “first pass” with three more on the way (assuming the book needs it). I’m told a copy editor will take a look at it next to catch what I missed. then it’ll come back to me for the third pass to approve their changes. There’s even room for a final pass, but I think we caught most if not all of it by that point.

Then it goes to the printers.

Then it’s sent to bookstores.

Then it hits shelves.

Then people read it.

I can’t remember who it was who said it, but I am in agreement with them that “art isn’t art until it’s seen. Until then it’s just indulgence.” Magicians Impossible, all 390 pages of it, i might add, will be released September 12, 2017. It will be reviewed (favorably and unfavorably I expect because you can’t please all of the people all of the time), people will buy it. Hopefully enough to make the experience all worthwhile.

[Some late-breaking news was that the audio book rights for Magicians sold for double what St. Martins’ was asking for and expecting. When I have more details I’ll pass them on, if audio-books are your thing]

What’s next for me? More writing, obviously. I’m trying to get my follow-up book into shopping shape sooner than later. I’m also hoping to take some actual time off this summer to not work, but with Magicians pending I have a limited window to strike.

That’s why I recently became a member of the ITW (International Thriller Writers) and have plans to attend their big annual meet-up this July in NYC.

I also have a new book proposal I’ve started sketching that, if it happens, will be something of a fulfillment of a childhood dream.

But that’s a story that will have to wait for another day.

And if we’re really, really lucky, we’ll even get to read it.