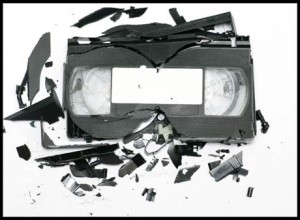 We saw it while we were walking along a country road.

The fact we were walking and not driving was probably unusual to the cars that passed us, but those cars and drivers, in a rush to get to wherever they were going, would have missed what we didn’t. It was strewn along the roadside, black shiny tape gleaming in the morning sun. Chunks of plastic were scattered across the road. A spindle lay in the bushes. And as we walked we found more strands of tape, buffeted by the breeze.

I remember our first VCR. It was a Betamax (cue your snickering, but I will point out that for years it remained THE professional standard. If you watched any TV news in the 80s, 90s, and well into the 2000s, you were watching Beta), it was the size of the desk I use now, loaded cassettes through the front, and the remote was connected by a cable. 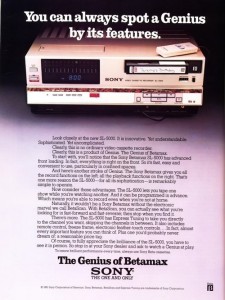 Like most people, we rented movies from a store; videotapes were ridiculously expensive in the day – 90, 100 dollars a pop. There was no “priced for retail” because the studios were making huge coin on their videotapes. Overnight, video stores popped up in mini malls and in place of record shops. Before home video, you wanted to see Star Wars, or a James Bond film, or The Towering Inferno, you had to wait for them to come on TV. And they aired in prime time too. That’s right, you’d watch Moonraker on ABC  – a “Network Television Premiere”, and with commercials it would occupy 3 hours of prime time. There were only 13 channels. They controlled when you saw a movie and which movie. The content provider was king.

So we rented movies, on weekends. Friends came over, we’d rent a movie. Over at a friend’s place, we’d watch a rental. Something stupid, or violent, or both.

Betamax lost the war to VHS, and while rental stores that carried both were around, the arrival of Blockbuster, which embraced VHS, effectively killed the commercial side of the format. We bought a VHS in 1988 and as of this writing my mother still has it. The digital clock in it only ran up to 2004 but she was still using it the last time I was up.

Blockbuster wiped out most of the mom and pop stores, giving everything a corporate sheen. You were guaranteed to find a copy of any new release; dubious classics like Another 48 Hours, Judge Dredd, Batman Returns, Armageddon. Of course if you were looking for something more esoteric you were SOL, especially if you lived in a small town and Blockbuster was the only game in town. 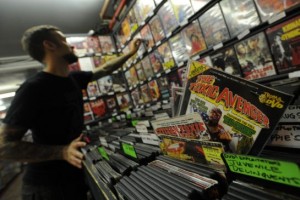 Along with Beta and VHS, I owned a Laserdisc player thru much of the 1990s. I even worked a summer at a store that sold and rented them and home theater systems. they’re no longer in business. It was a niche collector’s format, but I owned the Star Wars trilogy (non Special Edition versions) and at the time it was the best format for watching a movie outside of the theater. Some LDs I own have never been released on any format since then – the Criterion Collection editions of The Killer and Hard Boiled, Seven, The Adventures of Baron Munchausen and The Fisher King among them – and when I got a DVD player in 1999, I still bought LDs because they were so cheap. People were transitioning to DVD and unloading their collection, same as music enthusiasts dumped their old vinyl for CDs. 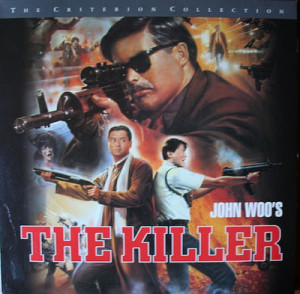 When my DVD player bit the dust in 2011, I bought a PS3, mostly for the Blu-Ray and DVD aspects. I own close to 500 movies in those formats … and 5 games. We watch a lot of streaming material on Netflix, drugging ourselves on entertainment and technology. I haven’t stepped inside a video store in years. There aren’t any around outside of the niche shops Blockbuster failed to kill. Blockbuster is gone too, or pretty much gone. Eventually DVD will disappear, and Blu Ray will probably become a niche collector’s format like LD. The future is streaming video and VOD. Just push a button and it’s there. You don’t own it, you’re only renting it, borrowing it. And if the broadcaster and supplier have a dispute, that title gets yanked. They control the content now, more so than they have since the 1970s when home video was in its infancy.  They control the horizontal and the vertical. They are the Videodrome Brian O’Blivion preached about. I bought the Blu-ray of Videodrome a couple months ago, and it’s more prophetic about the here and now than Cronenberg could have imagined 30 years ago.

Call me a luddite (“Brad, you’re a luddite”), but I still cast a wary eye towards digital technology. Obviously, because I celebrate the joys of analog technology in Mixtape.  Yes technology has made life easier, but I’m old-fashioned when it comes to my books and my movies and my music. I have to buy the media I want to enjoy over and over again. I want to feel it in my hand and know that I own it, I can watch it whenever I want to, and I won’t wake up some day to find it’s been pulled from my shelf because of an ongoing dispute between Time Warner and CBS. I don’t like digital books, or e-readers. I spend my days staring at a screen filled with words; when I want to decompress the last thing I want to do is pick up another screen and stare at that too.

Case in point: recently I acquired a copy of this beauty: 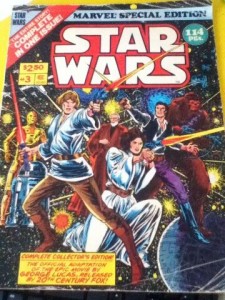 It cost me 10 dollars. In 1978 my mom paid $2.50 for it, and I read it until it fell apart. I hadn’t turned those pages in thirty years before I found this and bought it for old time’s sake. And reading it again was … magic. The feel of the paper, the smell of the aged newsprint. The panels and colors, faded but still vibrant, the pin-ups, the ads, all of it brought me 35 years back in time to the first moment she unveiled it to me.

You won’t get that experience with an e-book. You won’t get that experience with streaming video or audio. Time Warner Cable and Spotify control the content now. We’re just borrowing it. We no longer treasure books, or movies. They’re a distraction to keep us occupied while we check Twitter and Facebook for the umpteenth time. That lack of care extends to our daily experiences. People in movie theaters don’t know to keep quiet while the movie’s playing, and don’t know (or most likely don’t care) that no matter how surreptitiously they think they’re checking their phone, someone else in the theater can see them and be distracted by it. 2013 boasted the least memorable summer movie season in memory filled with the least remarkable summer movies since I can remember first watching movies. It’s like the filmmakers don’t even care anymore because we seem to have given up on caring about anything meaningful or special. And I’m still trying to figure out which of us lost the most.

I don’t know what was on that videotape strewn along the roadside. Maybe home movies, maybe old TV shows. Maybe it was just an old videotape, and no longer worth the bother. I don’t know what became of the boxes of videotapes I owned for years before donating them to a Library. They may still be on the shelves, they may be in a landfill. Some may be crushed bits of plastic and tape strewn across a country road. But for a time they contained magic. Magic we’ve now lost to the digital age. It’s called progress, and progress always leaves the corpses of the obsolete in its wake.