So last week I descended into the maelstrom of Internet madness. Sort of. See there’s this thing called GISHWHES, or “The Greatest International Scavenger Hunt The World has Ever Seen.” It was created by an actor named Misha Collins who you may know from the series Supernatural and a certain SyFy Channel film of note: 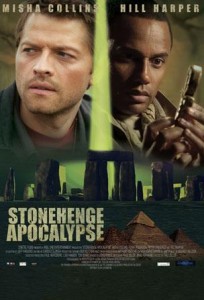 Basically it’s what it says it is – a scavenger hunt. In 2012 it shattered two Guinness World Records: one for the largest scavenger hunt ever, with more than 14,000 participants from 69 countries and the second, for the most pledges to commit a Random Act of Kindness.

Now living in my little bubble I had never heard of GISHWHES and was totally in the dark about its existence until one, then another person emailed me out of the blue thru this very website to ask if I could help their team out. The task they had been given was “have a published Sci Fi author write a 140 word story about Misha Collins, the Queen, and an Elopus (an Octopus with an Elephant’s head)”.

Apparently this “get” was a major one, given that authors and writers tend to be a curmudgeonly lot who avoid doing anything for anybody unless it involves money exchanging hands. But as we all know I’m not one of those writers. And to me the challenge of telling a story (okay, 2 stories) in 140 words or less was too good a challenge to pass up. And also because the people asking seemed really nice and enthusiastic and were doing a lot of charitable work as part of their work, and we so rarely get chances to do good in a world that seems full of bad.

So I wrote two stories. And with GISHWHES 2014 wrapped, I am publishing them below for your reading enjoyment.

He tried not to tremble as the sword rose before him, but as she spoke the hairs on his neck stood rigid.

“May I borrow your sword?” he asked politely.

He didn’t wait for an answer, snatching the blade and pivoting clean as the beast released its suction grip on the rafters high above and dropped, trumpeting its battle cry.  He swung the sword, separating the Elopus’ head from its neck. The eight limbed body sprayed ink as it spasmed uncontrollably. The head bounced off the marble floor and landed upright, its trunk limp, its eyes already fogging over. Then, silence.

He handed the sword back. “Sorry your majesty, that Elopus has been hunting me since Cairo.”

“We see we weren’t hasty in our decision” the Queen smiled. She touched the sword to his shoulder. “Rise, Sir Misha Collins.

The Elopus lunged, limbs flailing, trunk blaring its battle cry.  It lurched —  and shuddered to a halt. Expletives sounded deep within the rubber suit.

Technicians raced in and removed the mask. The sweaty operator gasped for air. The director threw his script down angrily.

Misha handed his prop gun off and took a seat in his folding chair. They were already a day behind on a twelve day shoot and SyFy would not be happy. Someone tapped his shoulder gently. “Cappuccino, he said without looking. The hand tapped again and this time he looked.

“Sir Misha Collins?” the clipped British tones asked. The man was dressed formal, an envelope with the Royal Sigil in hand. Misha took it, opened, and read.

He was on the next flight to Heathrow. SyFy could wait. The Queen could not.

I like to think of them as sequels to each other, with “Elopus Apocalypse” being part of a new trend of SyFy Channel movies based on true stories. My only regret is I didn’t get a third request where I’d be able to finish the trilogy. Maybe next year.

And yes I am aware this is the second (and technically third) time I’ve written something for Misha Collins. You’d think he’d return my calls by now.