If you’re a regular reader of this infrequently updated blog – or better yet a reader of Mixtape – you’ll know I’m a firm believer in the ability of music to change your world. The right song at the right moment in your life can have repercussions that echo through your entire life. This is the story of one of those songs that still echoes.

So it’s 1992. My birthday to be exact. Note I didn’t say “happy” birthday, because this one wasn’t. Generally I hate celebrating my birthday because who on earth wants to celebrate getting older? Most years I won’t even acknowledge it. But this year in particular sticks out because it was my last birthday “celebrated” at home. This was senior year of High School and I was heading off to college that fall. Of course in the moment I wasn’t sure that was going to happen because I had  something of a problem, namely I thought I was a talentless, worthless, and doomed to failure. My Big Plan was to go to Film School. Everyone thought that was a bad idea. They thought I should be realistic, that I should have a backup, that a career in the movie biz was incredibly difficult and who was I to think I could succeed in it when so many others more talented than me didn’t? they told me I was just not good enough or talented enough or hard working enough to ever make it.

And I believed them.

Plus, this was also at a time when my parents were fighting and arguing, near constantly (the news that hit me later that year – at Christmas, naturally – that they were separating wasn’t really a surprise). On the birth day in question, while opening my presents, something set one or the other off and soon enough they were yelling at each other while I tried to enjoy my birthday. But, I didn’t and rather than confront them, or ask them to keep their B.S. to themselves for just one day, I left. I got my coat and keys, hopped into my car and drove off. I had a dinner invite, and a party to go to later that night but I blew those off and just drove to nearby Kingston by myself, grabbed dinner by myself, drove around by myself, drove home by myself. Naturally I was listening to music – my mixtapes – but the song this is about wasn’t on those. 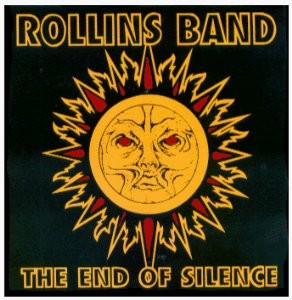 I first saw The Rollins Band at the first Lollapalooza festival the summer before, where they had the first slot of the day. The unenviable opening slot; first in the afternoon to a half-empty stadium. Not that they cared; they brought everything they had. And while I liked them, nothing indicated just how important this band and singer were to become in my life.

Low Self Opinion was – I believe – the second single off the album, so it didn’t appear on my radar until later that year, just before I graduated. By then that miserable birthday had been shoved off onto the corner where I keep all my other unhappy memories. I managed to graduate with pretty good grades, and shortly thereafter I found out I had been accepted . So to set the scene; I was looking forward to college, I was frightened of leaving home, but mostly I was looking forward to moving  already. But there was still some unfinished business — Lollapalooza 1992 was approaching, and I was trying to cram in as much fun into that summer as I could before college began and shit got “real”.

To me (and frankly, to everyone) college represented a chance to reset the clock and reinvent myself.  Really it’s one of the few chances in life you get to become the person you want to be. But doing that is more difficult than you think. You can maintain the illusion for a while but that old you – the real you – is still there lurking in your shadow. And while I knew who I wanted to be I also knew who I was. That angry, lonely kid who still felt he was destined to fail.

And then one day in June I heard it. More appropriately I saw it. I watched. I listened. I hopped in my car, drove to the local record store, and bought the album. Because the person that song was describing was me to an absolute T.

[Do me a favor, even if you know it, please click and listen/watch this video below before continuing]

It was freaky how accurately it described me at that time. Because I had been alienating myself and everybody else. My self-ridicule, my continued suffering in silence, my brushing off of friends and parties, my generally treating people like shit so they’d feel the way I did, which was miserable. Hearing this song, listening to it over and over again told me that I wasn’t fooling them – I was fooling myself. And slowly but surely I realized that while I had no control over who I was, I could control how I was. And I knew that if I carried the baggage of that person to college I’d end up being the same person I was thru high school.

Was it easy? No. Was I successful? More or less. I still have those moments of feeling inadequate, of feeling like a failure, but they don’t last nearly as long as they used to, and when they do come I usually get over them off and move on. But success is built on the foundations of your failure. Like a pyramid, the base is large and wide, chock full of disappointment. The next level is slightly smaller, and the level above smaller than that. All the way up those failures get less and less and pretty soon you find yourself standing at the summit, gazing out over a whole different looking world.

If I tally up Rollins Band performances and spoken word performances over the years I realize I’ve seen Henry Rollins more than I’ve seen any performer ever, and spanning over two decades.

But the most important show — to me anyway — was on August 26 1992, six months after The End of Silence, six months after that disastrous birthday. Only a few short days before I departed for college, I saw the Rollins Band. And as the band tore through their ferocious set I reflected on how much had changed since the last time – the first time – I saw them only a year before. And it was the first time I really knew that I would be alright.

I have been writing movies and TV and comic books and now a novel, all full time since early 1999. All those predictions that I wouldn’t make it fell flat. That’s not the first time people have bet against me and lost, but I’m still here, and in its own small way that song was responsible for putting me here. I’m successful, obviously, but not so successful that I forgot what it’s like to think you have nothing to offer to anybody.

I still listen to Henry Rollins too. He’s more or less retired from music, but he still does spoken word tours, hosts a radio show on KCRW in L.A. And he has an excellent podcast along with friend and assistant Heidi May called Henry and Heidi that is my weekly listening ritual (and you can find that on iTunes)

Now I’m not saying that this song or any song is the be all and cure-all for whatever’s ailing you. If you’re really dealing with severe depression, you need to see someone about it. But for me, the right song at the right moment told me that I wasn’t alone. That what I was feeling was felt by countless others at some point in their lives. And Henry probably felt it because he wrote and performed a song that ended up changing this kid’s life. If there is a song that has that effect of saying “things aren’t that bad. I can change. I can make it better” then hang onto that song for dear life and it’ll always be there for you when you need it to.