I’m about to drop a major truth bomb on you. Sitting comfortably? Good. here it is:

Yes, there’s art, yes, there’s craftsmanship to it; but make no mistake it is work.

It’s hard work too; anybody who tells you otherwise is probably the same person who says “Oh, I always wanted to write a book or a screenplay – they seem easy enough,” but waffle on why if it’s so “easy” they never bothered to try.  Writing is deadlines. Writing is submissions. Writing is rejection. Writing is redrafts and notes and edits. Writing is being handed your check and shown the door and someone else taking over and rewriting you. It is a job, and some days just getting the job done is the victory.

One question I like to ask the aforementioned who say “I just want to take a year off and write” is this even simpler one; “why”? What’s the end-game with your imagined year-long sabbatical?

Get your book published, obviously. Get your screenplay produced. Get your play performed.

And when that doesn’t happen, what then? Do you take another year off to write another? Or do you chuck it, and say, “this is bullshit”, which it often is (but you get used to the smell after a while).

Believe me, I know of what I speak. I just sold my first book. I created a critically acclaimed book series. I’ve had two screenplays produced, along with a mini series, and been a hired gun on three different childrens’ TV series. That’s my last 18 years so to speak (if you look at iMdb).

What you don’t see are the rejections. The passes. The turnarounds. The rewrites that obliterated my screen credit. The film/TV/comics/novels that didn’t happen.They were all hard soul-crushing, back-breaking work, and they’re all currently gathering dust. 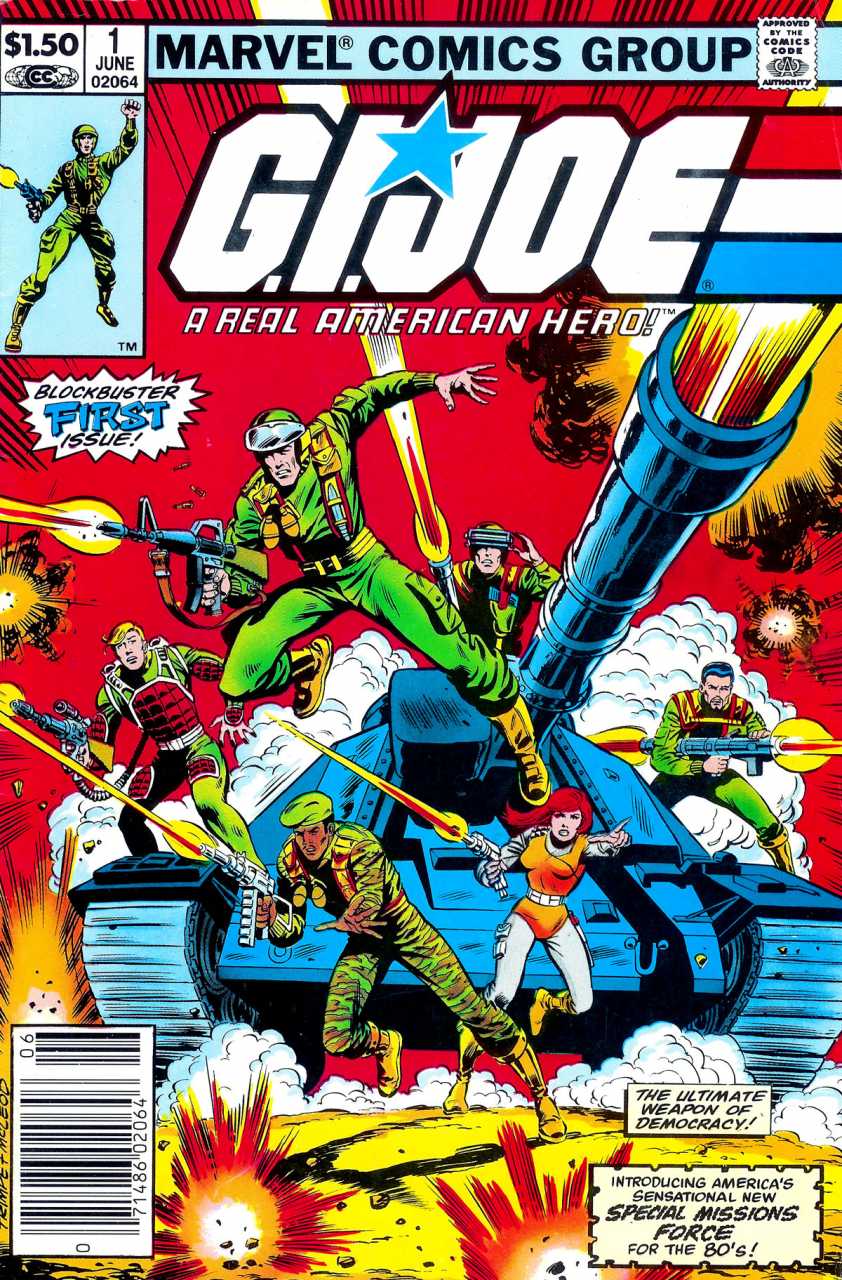 Now I’m going to divert from the main thread for a moment. It’s all because of my son, really. He’s at the age of exploration right now which means he gets into everything. And by everything I mean everything. So it was only a matter of time before he discovered what was in those longboxes I had in the living room.

Yep. My comic book collection, which has followed me around pretty much everywhere since 1984. So it was only a matter of time before grabby hands got his little mitts on them.

The damage wasn’t too severe; some were creased and folded, but I managed to get them away from him before the damage was permanent. And really, I’m not one of those “must remain mint” types. There are 30 years worth of comics squirreled away in those boxes, but today I want to talk about one title specifically.

From roughly 1984-1986 G.I. Joe: A Real American Hero (w: Larry Hama for the most part, art: various, including Herbe Trimpe and Marshall Rogers, Todd McFarlane and Andrew Wildman among others) was my favorite comic. It was actually the comic that started me buying comics on a regular basis. More astute readers – ones “in the know” who for their part will agree “knowing is half the battle” – will likely agree that 1984-1986 was the heyday of the toy and comic line. I had a pretty solid collection of the comics – the first 50 issues – but by 1986 I was falling out of love with the Joes. I had other interests – music, girls, movies – so the exploits of these Real American Heroes were less important. I still bought the book though mostly out of loyalty, but even then my comics buying had changed and I was gravitating more to Swamp Thing and Hellblazer and The Shadow and Sandman. Judging by my collection as it stood I tapped out around issue 70 , save for a minor buying-binge of issues in summer of 1993. But after I re-sorted them, I realized I was pretty close to completing the set. And I thought to myself; with eBay and other resources, why not finish the  finish the series? So what I did, and over the last couple of months, completed the set. And I then read them, all of them, start to finish.

Reading them through an adult perspective, what was really amazing to realize now is how much of the series was informed by the Vietnam War, and Hama’s experiences there.  It’s hard to remember now but in the 80s Vietnam was everywhere – a decade after the war ended America was finally starting to come to grips with it, and with how it treated its veterans. You saw this in movies like Platoon and Full Metal Jacket, and TV like China Beach, The A Team, and Tour of Duty. Even Magnum P.I. was a ‘Nam vet.

But Larry was the one who introduced me and my friends to Nam, making its most popular character Snake Eyes a vet, along with Stalker and Storm Shadow. And that was a thread that ran through the entire series run, up to and including issue 155, the final issue, in which Snake-Eyes pens a letter to the son of a former colleague planning to enlist in the army. The war was the thru-line of the entire series; it kept on changing lives years after it ended.

It wasn’t always pretty; by maybe 5 years into the run it became formulaic; new characters were introduced, they got a moment to shine, then you never saw them again. A catastrophically ill-conceived crossover with the Transformers in the 90s pretty much killed the series, which limped to its conclusion a year later. The readership, which began as kids in the early 80s were in college now, and they’d moved on. I know I had.

But you can’t fault Larry and his team for the missteps. They had a job to do and that job was to support the toy line. They were handed the characters and story-lines to use, and they did the best they could. The fact GI Joe lasted 12 years is a testament to their great work. It was one of Marvel’s top selling books for a time, and the back issue market was ridiculously expensive. 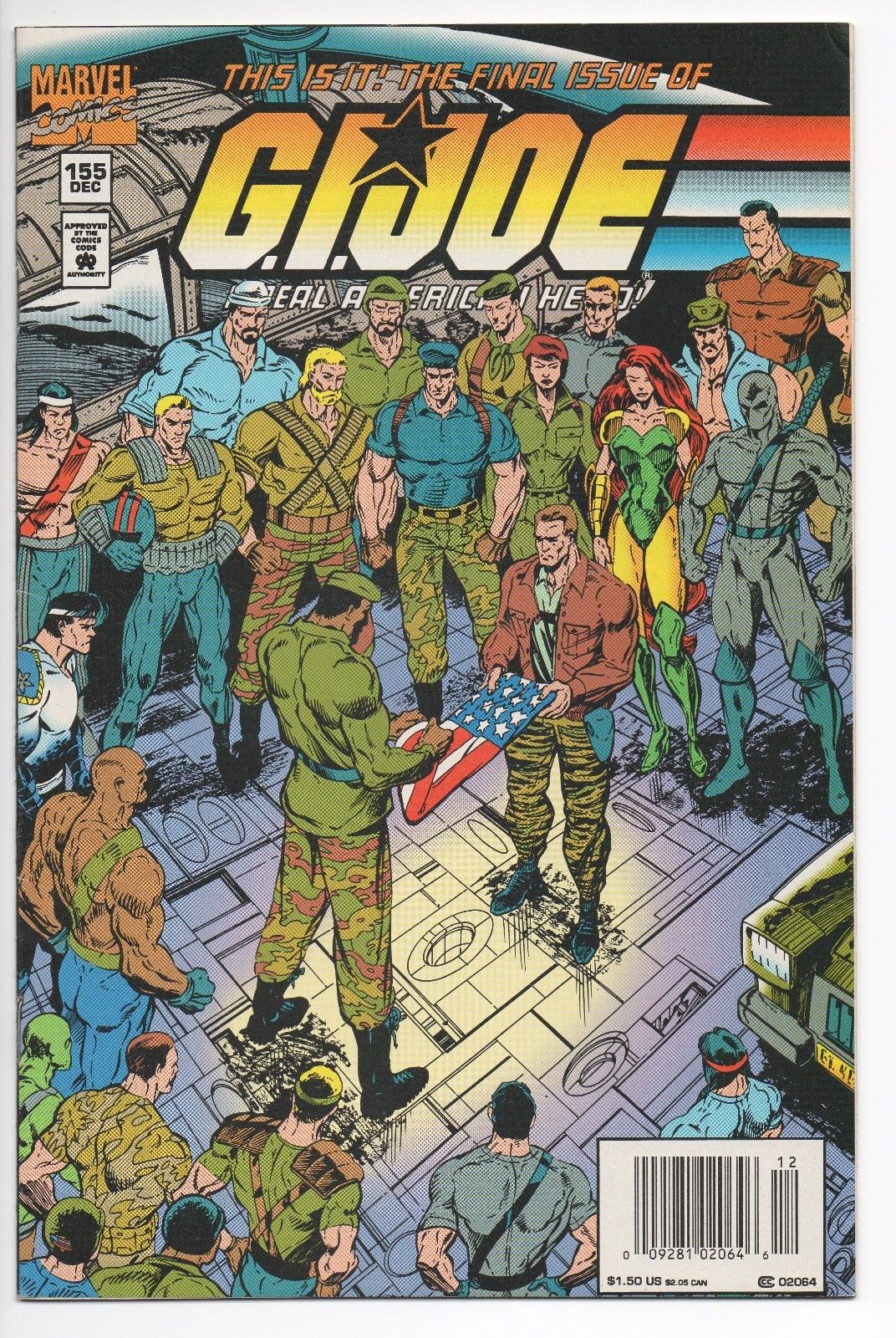 If you own a copy of this, congratulations on being rich

What it all boils down to is Larry had a job to do and he did it, to the point that when IDW picked up the GI Joe license, they invited Larry back to continue the original line from where he left off at issue 155. With the toy line pretty much dormant he has the freedom to tell the stories he wanted. But that doesn’t denigrate his work on the 80s  run on GI Joe at all. His task was herculean and for GI Joe to remain so good for so long, that takes talent. That takes work.

So what has G.I. Joe got to do with writing?

Because writing is about getting the job done.

It’s about telling a Robocop story that satisfies network and fan expectations, while working in some personal stories into it at the same time. it’s about charting the end of the world in all its ridiculous SyFy carnage while still telling the story you originally wanted to; about a person who devotes his life to crazy conspiracy theories and finds out one of them is coming true in the worst possible way.

It’s about the work.

The reason I’m most excited creatively about Magicians Impossible is because it meets the criteria of a personal project and a mainstream one. It’s got a major publishing house in its corner, it has a great team of editors and designers aboard, and it’s being released next summer.

But it was hell to write. Easily the most difficult thing I’ve ever undertaken. And that was before our child was born, roughly mid-way through the writing. Then it became nearly impossible. I look at that first draft and I can pinpoint the exact moment I became a parent. The quality of writing drops precipitously and never really recovers. Still, I soldiered on, even when in the act of creation I realized what I was writing was not working, that there was a much better way to tell the story, and somehow between the endless overnight feeds and chronic fatigue, I managed to figure out just what the story was about. Even when suffering a major back injury that meant the longest I could sit and type was an hour before the pain became too much, I still wrote. And in the end, Magicians Impossible is by far the best thing I’ve ever written, and the one I’m most proud of.

I did the work because writing is work, and it is my job.

That’s the lesson I take from reading these old comics with new eyes. Because sometimes getting the job done is the point.

Now you know. And knowing is half the battle.

*UPDATE: Someone asked me if I included GI Joe Special Missions (the short-lived spin-off from the main title, published bi-monthly between 1986 and 1989, focusing on stand-alone missions) in my big read-through. Not initially and not as part of the overall run. But after I finished G.I. JOE I decided what the hey, and went thru the 15 or so copies of Special Missions I owned. Boy am I glad I did! G. I. Joe: Special missions are consistently closest to “Classic” G.I. Joe stories – darker, more violent, more intense, more realistic. Plus nearly the entire series was drawn by the late great Herb Trimpe – who for this guy anyway remains the quintessential Joe artist. I’m in the process of tracking down the remaining issues of G.I. Joe Special Missions now.

**UPDATE UPDATE: after some mulling over (and on the advice of a fan) I decided to pull the trigger and start into the TPBs of the IDW continuation of the series, written by Larry Hama, which picks up after the events of issue 155. I have to say this was a great decision. It’s like Larry, free of the demands of introducing new characters and vehicles every couple of issues, is finally getting to tell the GI Joe stories he’s always wanted. Reading these new stories is very much like catching up with old friends. And after the year we’ve had, sometimes old friends are the best ones you have.