They say as an author you should never read the reviews of your own work. As an author I can say with authority you can and inevitably will read reviews of your work, especially when it’s your first novel. The good news is Magicians Impossible has been relatively well-received especially for a debut. It received multiple starred reviews, it made some top ten lists, it made some Best of 2017 lists.

I got some great fan mail too. People telling me Magicians broke them out of a reading rut.Some even saying it was one of the best books they ever read.

But of course not everybody liked it. And I’m not going to address any of that because why would I? Not everything is going to be someone’s cup of tea. A book, like any work of art, is what it is; it never changes. And how a person responds to it is 100% on them.

That said there is one recurring criticism of Magicians Impossible that I would like to address.

For some readers it all has to do with how quickly Jason seems to master his levels of magic. Some seem to feel it all happens in a couple of days. Some say a week. Those who paid attention would guess correctly that it more or less takes a month.

Here’s the correct answer. Spoilers lurk within so if you haven’t read Magicians Impossible why on earth are you visiting my website?

I mapped out the events of the book before I put words to paper, just to get it straight in my mind. Using October 2018 (the year after the book’s 2017 release) as a guideline I made a calendar of events so I’d know what happened and when.

Damon’s opening mission takes place on Friday September 28th. His funeral is Monday October 1st. The events that transpire up to the climactic events of Murder Hill happen between October 1st and October 29th – so four weeks total.

The bulk of Part One – everything from Damon’s Funeral through Jason’s visit to the Oracle takes place between October 1st and 5th. After the Oracle, Jason is on lock-down with no further training, and spends the next two weeks honing his Adept and Archmage skills. He doesn’t next advance in levels until the Louvre mission, which takes place on October 23rd when he “blinks” on his own for the first time, showing him he has the abilities of a War Seer (Level 4). He later wields an Enchantment spell (Level 3) on the Paris metro. Since it’s established that levels of magic are cumulative, it’s not out of the ordinary for you to leap ahead a level then backtrack to master the previous one. All told that’s a span of 19 days.

The rest of the story – the Temple of Bones, Jason’s visit with Damon, his throwing in his lot with the Golden Dawn, the Battle of the Citadel and Murder Hill takes place between October 24th and the 30th. There’s a three day (October 25-28) span between Jason deciding to join the Golden Dawn and his theft of the Sphere of Destiny. In that time he hones his newly acquired skills as an Enchanter and War Seer. He crosses over to the Diabolist Level on Murder Hill.

Now some would argue a month is too quickly to learn these skills let alone master them. But those people ignore the events at Murder Hill on July 4, 1999 when Jason was 12 years old and first exhibited the abilities of a Mage. But as he never got his Hogwarts letter or was recruited into the Invisible Hand those skills lay dormant until he crossed the threshold into the Citadel, where those powers began to be unlocked, by passing through the many doors and chambers of the Invisible Hand’s fortress.

So if you yourself was questioning how someone with no training could and advance so quickly, I hope the above clarifies it. And if not, maybe the below will. This is the calendar I put together three years ago when I was just drafting Magicians Impossible. Some details may have changed but I pretty much adhered to this breakdown. 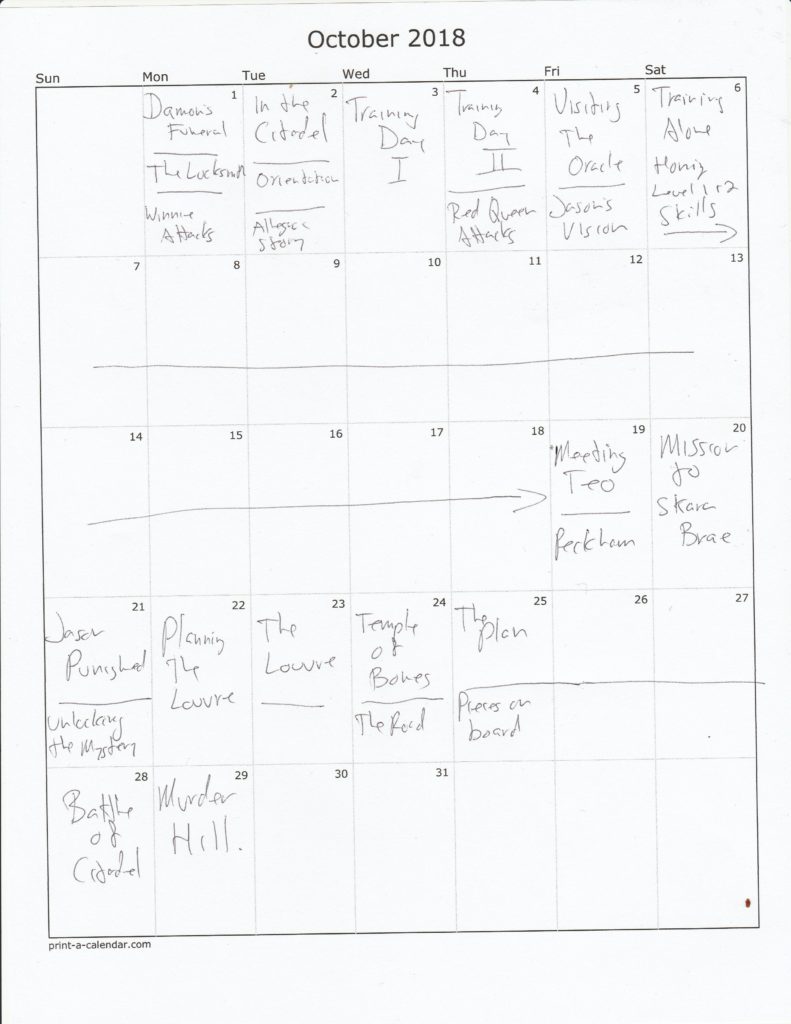 There are other criticisms I’m sure and I take no issue with any of them, not even the ones that accused me of ripping off books or video games or TV shows I’ve never read, played, or watched. I wasn’t even completely sure I should even address the timeline, but for people who surfed on in looking for answers, maybe this will do that.

[As a follow-up that’s not to say Magicians Impossible definitively takes place in 2018 or 2017, just that in my mind it takes place later this year]